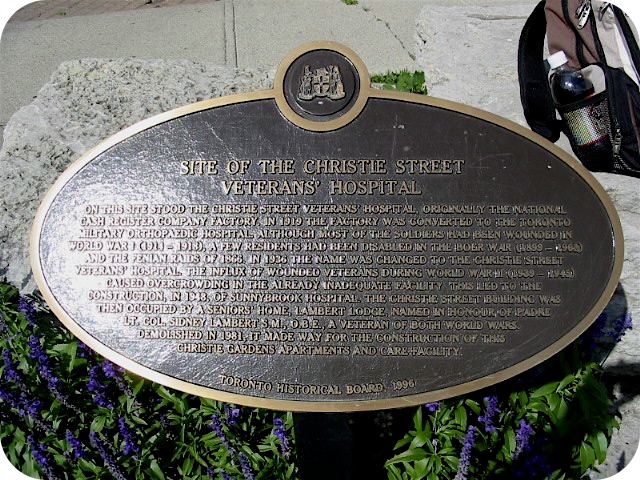 On this site stood the Christie Street Veterans' Hospital, originally the National Cash Register Company Factory. In 1919 the factory was converted to the Toronto Military Orthopaedic Hospital. Although most of the soldiers had been wounded in World War I (1914-1918), a few residents had been disabled in the Boer War (1899-1902) and the Fenian Raids of 1866. In 1936 the name was changed to the Christie Street Veterans' Hospital. The influx of wounded veterans during World War II (1939-1945) caused overcrowding in the already inadequate facility. This led to the construction, in 1948, of Sunnybrook Hospital. The Christie Street building was then occupied by a seniors' home, Lambert Lodge, named in honour of Padre Lt.Col. Sidney Lambert S.M. O.B.E., a veteran of both World Wars. Demolished in 1981, it made way for the construction of this Christie Gardens Apartments and Care Facility.