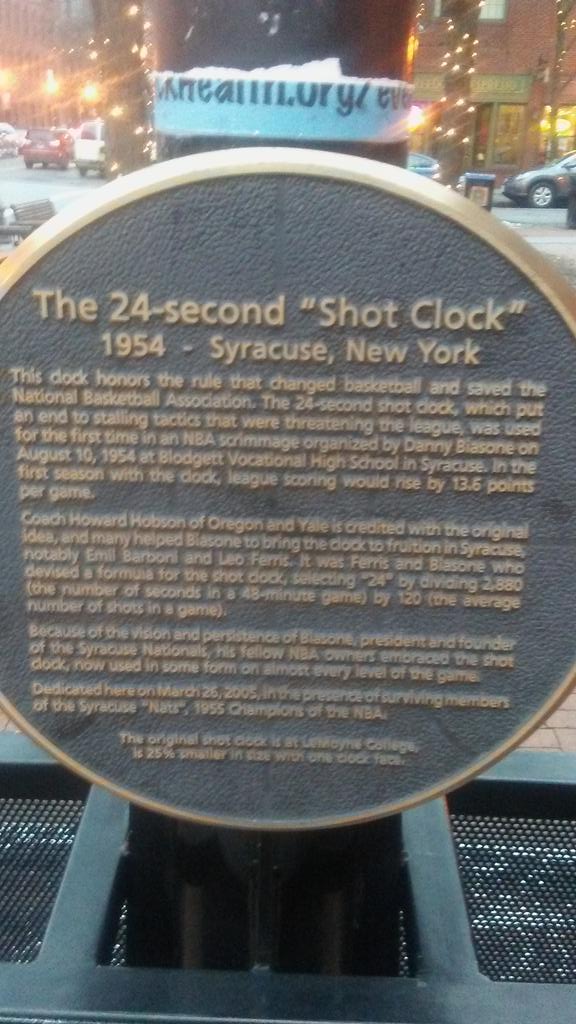 The 24-second "Shot Clock"
1954 Syracuse, New York
This clock honors the rule that changed basketball and saved the
National Basketball Association. The 24-second shot dock, which put
an end to stalling tactics that were threatening the league, was used
for the first time in an NBA scrimmage organized by Danny Biasone on
August 10, 1954 at Blodgett Vocational High School in Syracuse. In the
first season with the dock, league scoring would rise by 13.6 points
per game.
Coach Howard Hobson of Oregon and Yale is credited with the original
idea, and many helped Biasone to bring the clock to fruition in Syracuse,
notably Emil Barboni and Leo Ferris. It was Ferris and Biasone who
devised a formula for the shot clock, selecting "24\ by dividing 2,880
(the number of seconds in a 48-minute game) by 120 (the average
number of shots in a game)
Because of the vision and persistence of Biasone, president and founder
of the Syracuse Nationals, his fellow NBA owners embraced the shot
clock, now used in some form on almost every level of the game.
Dedicated here on March 26,2005, inthe presence of surviving members
of the Syracuse "Nats", 1955 Champions of the NBA.
The original shot clock is at LeMoyne College,
is 25% smaller in size with one clock face.
Submitted by @PTRQ