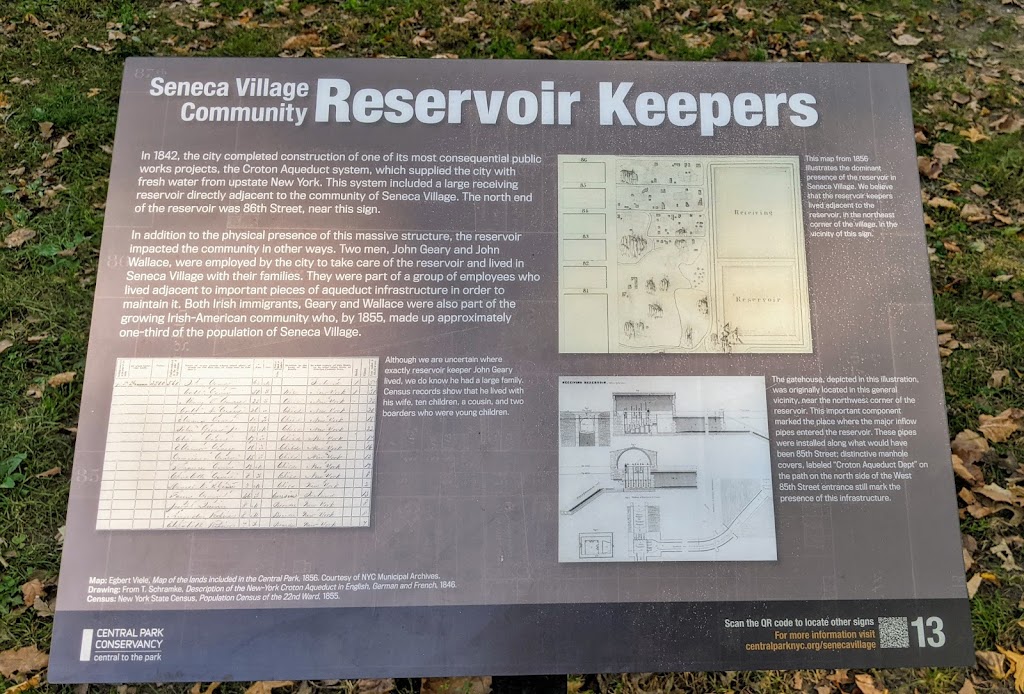 Reservoir Keepers
In 1842, the city completed construction of one of its most consequential public works projects, the Croton Aqueduct system, which supplied the city with fresh water from upstate New York. This system included a large receiving reservoir directly adjacent to the community of Seneca Village. The north end of the reservoir was 86th Street, near this sign.
In addition to the physical presence of this massive structure, the reservoir impacted the community in other ways. Two men, John Geary and John Wallace, were employed by the city to take care of the reservoir and lived in Seneca Village with their families. They were part of a group of employees who lived adjacent to important pieces of aqueduct infrastructure in order to maintain it. Both Irish immigrants, Geary and Wallace were also part of the growing Irish-American community who, by 1855, made up approximately one-third of the population of Seneca Village.
Although we are uncertain where exactly reservoir keeper John Geary lived, we do know he had a large family. Census records show that he lived with his wife, ten children, a cousin, and two boarders who were young children.
This map from 1856 illustrates the dominant presence of the reservoir in Seneca Village. We believe that the reservoir keepers lived adjacent to the reservoir in the northeast corner of the village in the vicinity of this sign.
The gatehouse, depicted in this illustration, was originally located in this general vicinity, near the northwest corner of the reservoir. This important component marked the place where the major inflow pipes entered the reservoir. These pipes were installed along what would have been 85th Street; distinctive manhole covers, labeled "Croton Aqueduct Dept" on the path on the north side of the West 85th Street entrance still mark the presence of this infrastructure.
Map: Egbert Viele, Map of the lands included in the Central Park, 1856. Courtesy of NYC Municipal Archives. Drawing: From T. Schramke, Description of the New-York Croton Aqueduct in English, German and French, 1846. Census: New York State Census, Population Census of the 22nd Ward, 1855.
Submitted by @lampbane