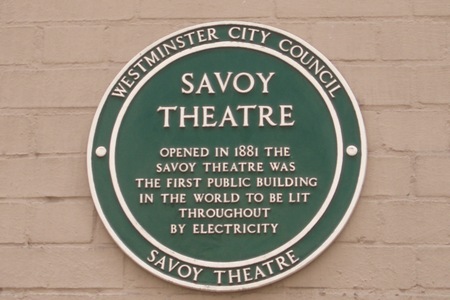 Walking down a small side street (Carting Lane) down the side of the Savoy Theatre in central London, you glance to your left a see a small green plaque on the wall which points out that the Savoy Theatre (opened in 1881) was the first public building in the world to be lit throughout by electric lighting.

The Savoy was a state-of-the-art theatre and the first public building in the world to be lit entirely by electricity. Sir Joseph Swan, inventor of the incandescent light bulb, supplied about 1,200 Swan incandescent lamps, and the lights were powered by a 120 horsepower generator on open land near the theatre. Carte explained why he had introduced electric light: “The greatest drawbacks to the enjoyment of the theatrical performances are, undoubtedly, the foul air and heat which pervade all theatres. As everyone knows, each gas-burner consumes as much oxygen as many people, and causes great heat beside. The incandescent lamps consume no oxygen, and cause no perceptible heat.” The first generator proved too small to power the whole building, and though the entire front-of-house was electrically lit, the stage was lit by gas until 28 December 1881. At that performance, Carte stepped onstage and broke a glowing lightbulb before the audience to demonstrate the safety of the new technology.