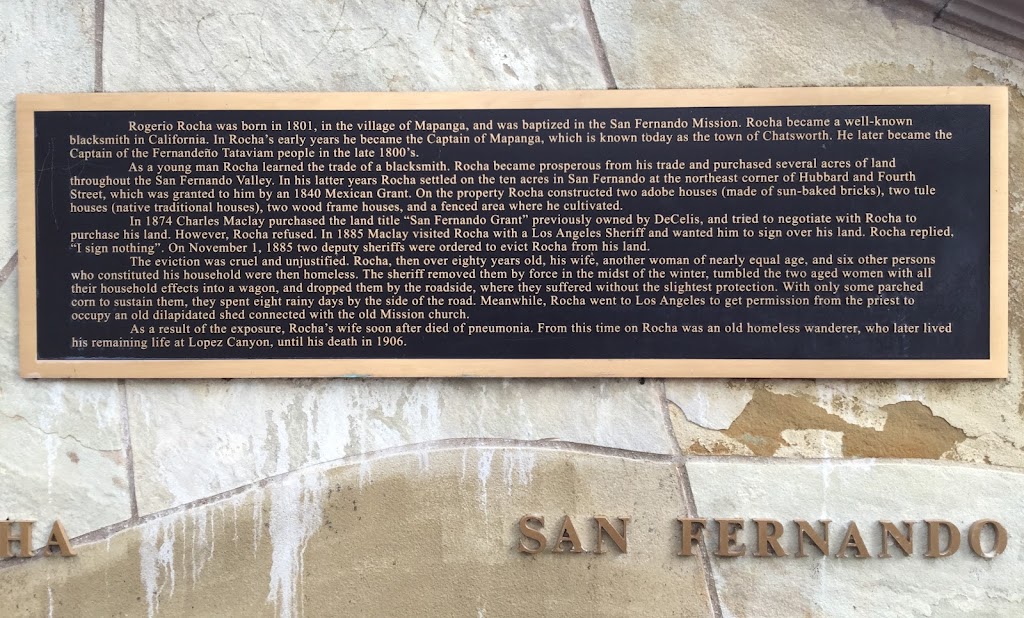 As a young man, Rocha learned the trade of a blacksmith. Rocha became prosperous from his trade and purchased several acres of land throughout the San Fernando Valley. In his latter years Rocha settled on the ten acres in San Fernando at the northeast corner of Hubbard and Fourth Street, which was granted to him by an 1840 Mexican grant. On the property, Rocha constructed two adobe houses (made of sun-baked bricks), two tule houses (native traditional houses), two wood frame houses, and a fenced area where he cultivated.

In 1874 Charles Maclay purchased the land title "San Fernando Grant" previously owned by DeCelis, and tried to negotiate with Rocha to purchase his land. However, Rocha refused. In 1885 Maclay visited Rocha with a Los Angeles Sheriff and wanted him to sign over his land. Rocha replied, "I sign nothing". On November 1, 1885 two deputy sheriffs were ordered to evict Rocha from his land.

The eviction was cruel and unjustified. Rocha, then over eighty years old, his wife, another woman of nearly equal age, and six other persons who constituted his household were then homeless. The sheriff removed them by force in the midst of the winter, tumbled the two aged women with all their household effects into a wagon, and dropped them by the roadside, where they suffered without the slightest protection. With only some parched corn to sustain them, they spent eight rainy days by the side of the road. Meanwhile, Rocha went to Los Angeles to get permission from the priest to occupy an old dilapidated shed connected with the old Mission church.

As a result of the exposure, Rocha's wife soon died of pneumonia. From this time on, Rocha was an old homeless wanderer, who later lived his remaining life at Lopez Canyon, until his death in 1906.