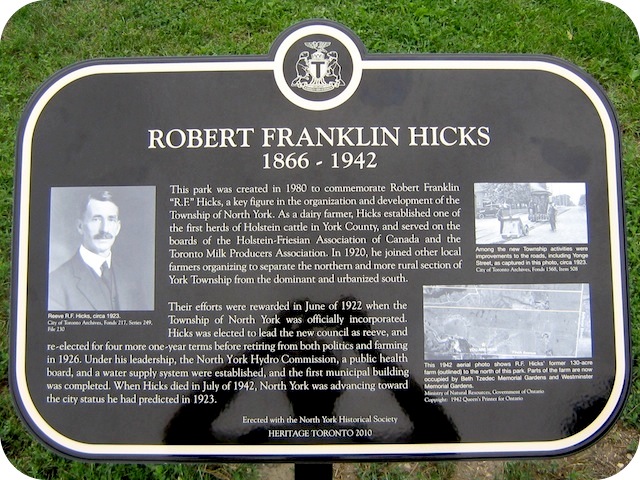 This park was created in 1980 to commemorate Robert Franklin "R.F." Hicks, a key figure in the organization and development of the Township of North York. As a dairy farmer, Hicks established one of the first herds of Holstein cattle in York County, and served on the boards of the Holstein-Friesian Association of Canada and the Toronto Milk Producers Association. In 1920, he joined other local farmers organizing to separate the northern and more rural section of York Township from the dominant and urbanized south.
Their efforts were rewarded in June of 1922 when the Township of North York was officially incorporated. Hicks was elected to lead the new council as reeve, and re-elected for four more one-year terms before retiring from both politics and farming in 1926. Under his leadership, the North York Hydro Commission, a public health board, and a water supply system were established, and the first municipal building was completed. When Hicks died in July of 1942, North York was advancing toward the city status he had predicted in 1923.