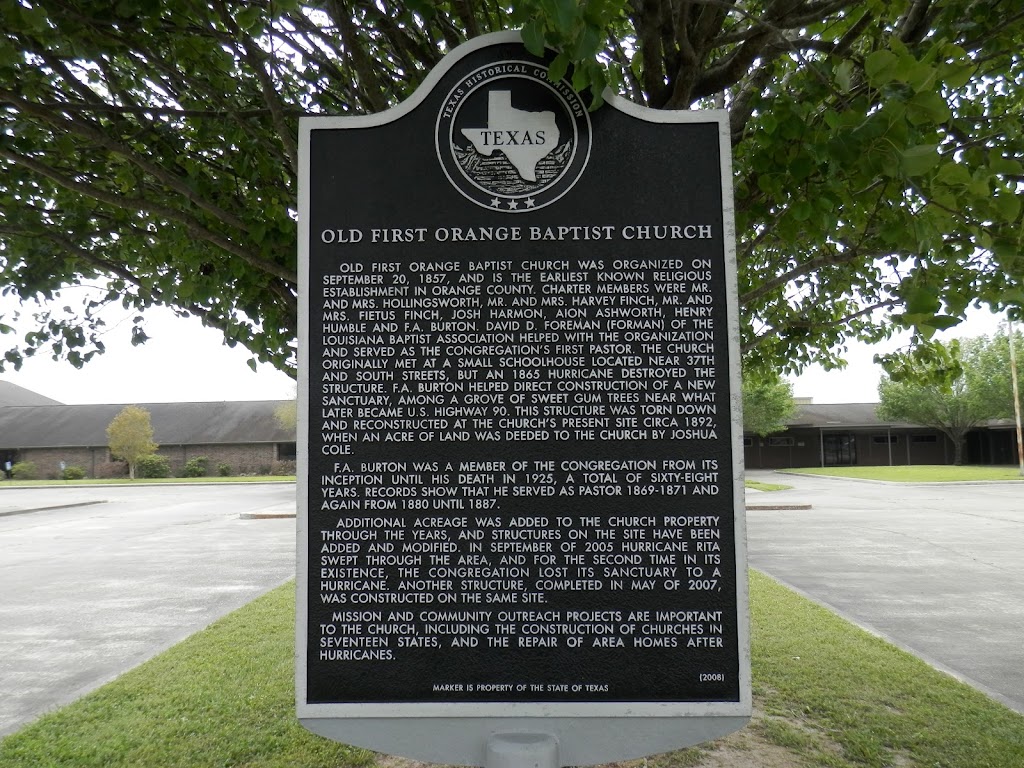 Old First Orange Baptist Church was organized on September 20, 1857, and is the earliest known religious establishment in Orange County. Charter members were Mr. and Mrs. Hollingsworth, Mr. and Mrs. Harvey Finch, Mr. and Mrs. Fietus Finch, Josh Harmon, Aion Ashworth, Henry Humble and F.A. Burton. David D. Foreman (Forman) of the Louisiana Baptist Association helped with the organization and served as the congregation's first pastor. The church originally met at a small schoolhouse located near 37th and South Streets, but an 1865 hurricane destroyed the structure. F.A. Burton helped direct construction of a new sanctuary, among a grove of sweet gum trees near what later became U.S. Highway 90. This structure was torn down and reconstructed at the church's present site circa 1892, when an acre of land was deeded to the church by Joshua Cole. F.A. Burton was a member of the congregation from its inception until his death in 1925, a total of sixty-eight years. Records show that he served as pastor 1869-1971 and again from 1880 until 1887. Additional acreage was added to the church property through the years. And structures on the site have been added and modified. In September of 2005 Hurricane Rita swept through the area, and for the second time in its existence, the congregation lost its sanctuary to a hurricane. Another structure, completed in May of 2007, was constructed on the same site. Mission and community outreach projects are important to the church, including the construction of churches in seventeen states, and the repair of area homes after hurricanes. (2008)