Natchez Under-the-Hill - Life on the Riverfront 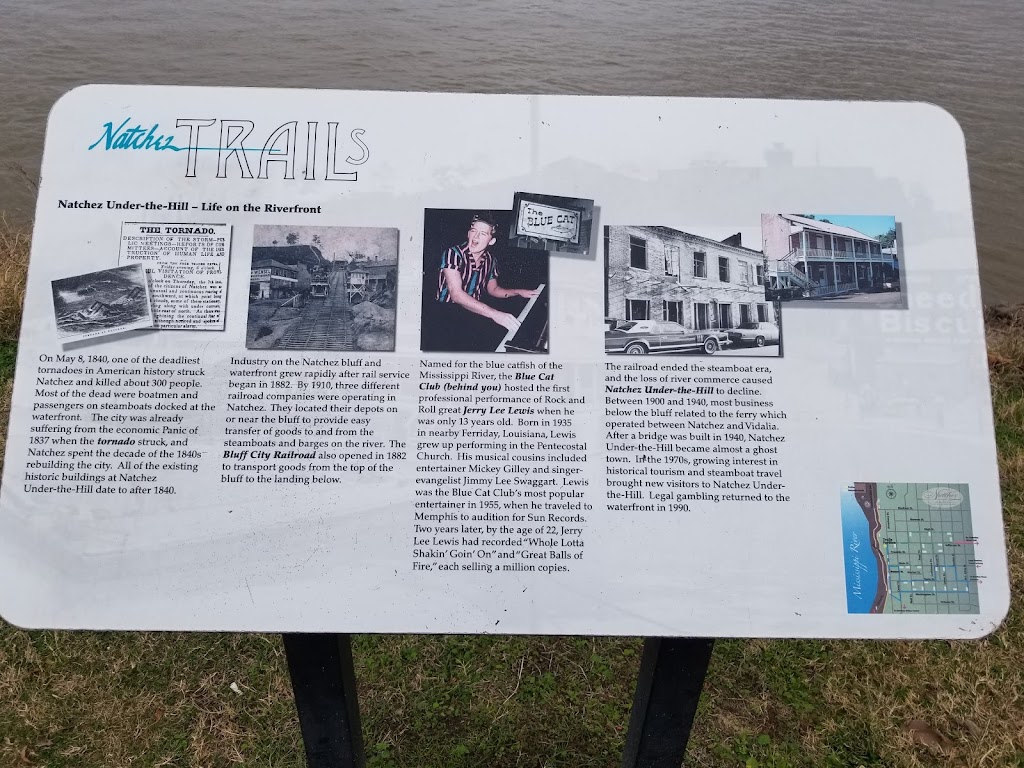 On May 8, 1840, one of the deadliest tornadoes in American history struck Natchez and killed about 300 people. Most of the dead were boatmen and passengers on steamboats docked at the waterfront. The city was already suffering from the economic Panic of 1837 when the tornado struck, and Natchez spent the decade of the 1840s-rebuilding the city. All of the existing historic buildings at Natchez Under-the-Hill date to after 1840.

Industry on the Natchez bluff and waterfront grew rapidly after rail service began in 1882. By 1910, three different railroad companies were operating in Natchez. They located their depots on or near the bluff to provide easy transfer of goods to and from the steamboats and barges on the river. The Bluff City Railroad also opened in 1882 to transport goods from the top of the bluff to the landing below.

Named for the blue catfish of the Mississippi River, the Blue Cat Club (behind you) hosted the first professional performance of Rock and Roll great Jerry Lee Lewis when he was only 13 years old. Born in 1935 in nearby Ferriday, Louisiana, Lewis grew up  performing in the Pentecostal Church. His musical cousins included entertainer Mickey Gilley and singer-evangelist Jimmy Lee Swaggart. Lewis was the Blue Cat Club's most popular entertainer in 1955, when he traveled to Memphis to audition for Sun Records. Two years later, by the age of 22, Jerry Lee Lewis had recorded "Whole Lotta Shakin' Goin' On" and "Great Balls of Fire," each selling a million copies.