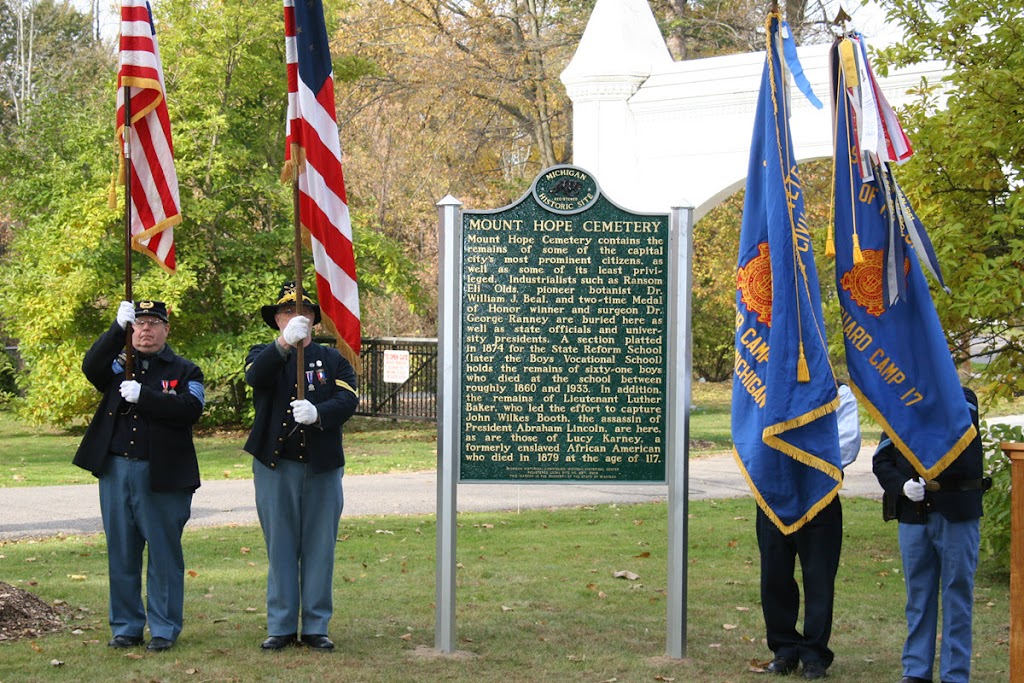 Mount Hope Cemetery opened as Lansing's new city cemetery in June 1874 on what was formerly the John Miller Farm. Between 1874 and 1881 the city vacated the Lansing City Cemetery, located on the site of what would become Oak Park, and moved roughly one thousand graves to Mount Hope. Frederick W. Higgins, superintendent of Detroit's Woodmere Cemetery, planned the drives, and Henry Lee Bancroft, Lansing cemetery superintendent and director of parks and recreation from 1914 to 1957, developed the landscape over many years. The rolling terrain, curving drives, and variety and profusion of monuments reflect cemetery concepts of the mid-nineteenth century. A large obelisk, the city's Civil War soldier's monument was dedicated in 1878 on one of the highest points in the cemetery.Mount Hope Cemetery contains the remains of some of the capital city's most prominent citizens, as well as some of the least priveleged. Industrialists such as Ransom Eli Olds, pioneer botanist Dr. William J. Beal, and two-time Medal of Honor winner and surgeon Dr. George Ranney are buried here as well as state officials and university presidents. A section platted in 1874 for the State Reform School (later the Boys Vocational School) holds the remains of sixty-one boys who died between roughly 1860 and 1933. In addition the remains of Lieutenant Luther Baker, who led the effort to capture John Wilkes Booth, the assassin of President Abraham Lincoln, are here, as well as those of Lucy Karney, a formerly enslaved African American who died in 1879 at the age of 117.