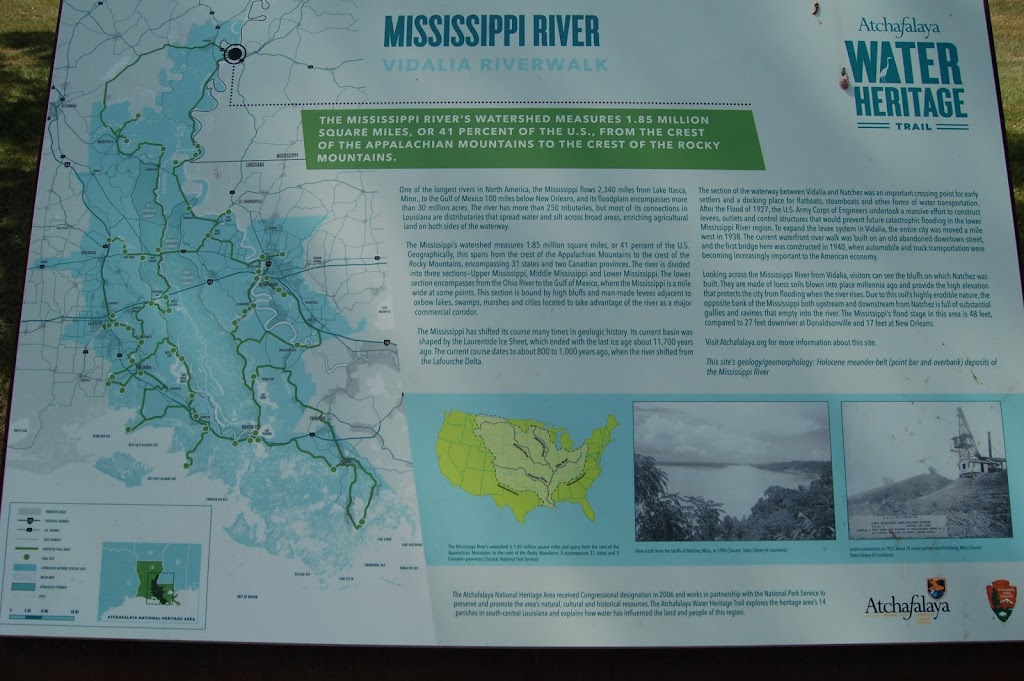 One of the longest rivers in North America, the Mississippi flows 2,340 miles from Lake Itasca, Minn., to the Gulf of Mexico 100 miles below New Orleans, and its floodplain encompasses more than 30 million acres. The river has more than 250 tributaries, but most of its connections in Louisiana are distributaries that spread water and silt across broad areas, enriching agricultural land on both sides of the waterway.

The Mississippi’s watershed measures 1.85 million square miles, or 41 percent of the U.S. Geographically, this spans from the crest of the Appalachian Mountains to the crest of the Rocky Mountains, encompassing 31 states and two Canadian provinces. The river is divided into three sections—Upper Mississippi, Middle Mississippi and Lower Mississippi. The lower section encompasses from the Ohio River to the Gulf of Mexico, where the Mississippi is a mile wide at some points. This section is bound by high bluffs and man-made levees adjacent to oxbow lakes, swamps, marshes and cities located to take advantage of the river as a major commercial corridor.

The Mississippi has shifted its course many times in geologic history. Its current basin was shaped by the Laurentide Ice Sheet, which ended with the last ice age about 11,700 years ago. The current course dates to about 800 to 1,000 years ago, when the river shifted from the Lafourche Delta.

The section of the waterway between Vidalia and Natchez was an important crossing point for early settlers and a docking place for flatboats, steamboats and other forms of water transportation. After the Flood of 1927, the U.S. Army Corps of Engineers undertook a massive effort to construct levees, outlets and control structures that would prevent future catastrophic flooding in the lower Mississippi River region. To expand the levee system in Vidalia, the entire city was moved a mile west in 1938. The current waterfront river walk was built on an old abandoned downtown street, and the first bridge here was constructed in 1940, when automobile and truck transportation were becoming increasingly important to the American economy.

Looking across the Mississippi River from Vidalia, visitors can see the bluffs on which Natchez was built. They are made of loess soils blown into place millennia ago and provide the high elevation that protects the city from flooding when the river rises. Due to this soil’s highly erodible nature, the opposite bank of the Mississippi both upstream and downstream from Natchez is full of substantial gullies and ravines that empty into the river. The Mississippi’s flood stage in this area is 48 feet, compared to 27 feet downriver at Donaldsonville and 17 feet at New Orleans.