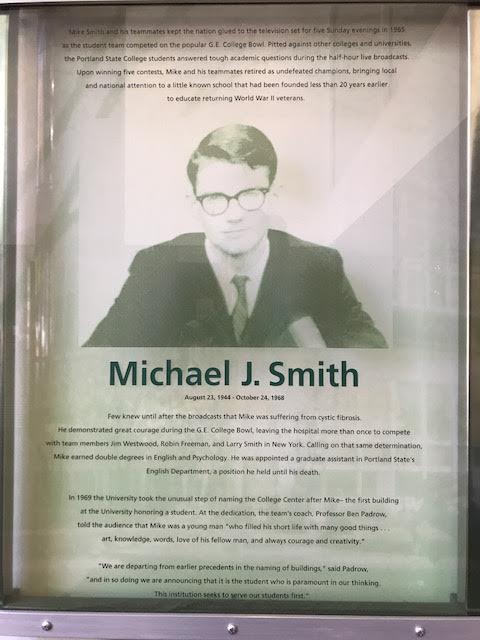 This is the plaque that started Read The Plaque. Hear Roman Mars and John Marr discuss it on this episode of 99% Invisible (starts at 9:51) or just the Read the Plaque clip here: .

Michael J. Smith and his teammates kept the nation glued to the television set for five Sunday evenings in 1965
as the student team competed on the popular G.E. College Bowl. Pitted against other colleges and universities,
the Portland State College students answered tough academic questions during the half hour live broadcasts.
Upon winning five contests, Mike and his teammates retired as undefeated champions, bringing local
and national attention to a little known school that had been founded less than 20 years earlier
to educate returning World War II veterans.

Few knew until after the broadcasts that Mike was suffering from cystic fibrosis.
He demonstrated great courage during the G.E. College Bowl, leaving the hospital more than once to compete
with team members Jim Westwood, Robin Freeman, and Larry Smith in New York. Calling on that same determination,
Mike earned double degrees in English and Psychology. he was appointed a graduate assistant in Portland State's
English Department, a position he held until his death.

In 1969 the University took the unusual step of naming the College Center after Mike -- the first building
at the University honoring a student. At the dedication, the team's coach, Professor Ben Padrow,
told the audience that Mike was a young man "who filled his short life with many good things...
art, knowledge, words, love of his fellow man, and always courage and creativity."

"We are departing from earlier precedents in the naming of buildings,' said Padrow,
"and in so doing we are announcing that it is the student who is paramount in our thinking.
This institution seeks to serve our students first."