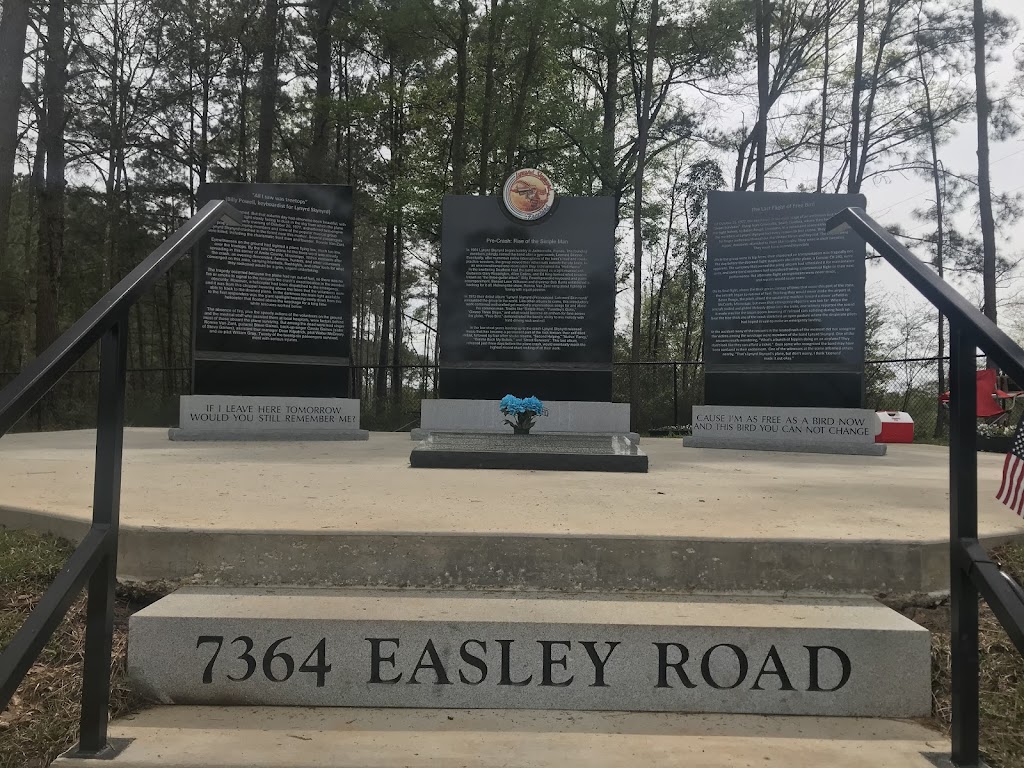 In 1964 Lynyrd Skynyrd began humbly in Jacksonville, Florida. The founding members jokingly named the band after a gym coach, Leonard Skinner. Eventually, after numerous police interruptions of the band's loud and rowdy practice sessions, the group moved their rehearsals outside the city limits, to an unairconditioned one-room cabin they nicknamed the "Hell House". In the sweltering Southern heat the band solidified as a tight musical unit. Guitarists Gary Rossington, Allen Collins, and Ed King formed what became known as "the three-guitar attack". Billy Powell provided keyboard and piano accompaniment. Bassist Leon Wilkeson and drummer Bob Burns established a backing for it all. Helming the show, Ronnie Van Zant sang about fighting or loving with equal passion.

In 1973 their debut album "Lynyrd Skynyrd (Pronounced: Leh-nerd Skin-nerd)" announced the group to the world. Like other albums to come, this introductory work contained well-crafted yet musically unpretentious songs for and about the common man. Tracks like "Simple Man," "Tuesday's Gone," "Gimme Three Steps," and what would become an anthem for fans across the globe, "Free Bird," demonstrated the band's ability to mix melody with hard-driving rock and roll.

In the few short years leading up to the crash Lynyrd Skynyrd released music that has become a permanent part of the rock lexicon: their self-titled debut, followed by four other studio albums, "Second Helping," "Nuthin' Fancy," "Gimme Back My Bullets," and "Street Survivors". This last album, released just three days before the plane crash, would eventually reach the highest record chart ranking of all their work.

Panel 2
"All I saw was treetops" (Billy Powell, keyboardist for Lynyrd Skynyrd)

The flight was doomed. But that autumn day had otherwise been beautiful, with the late afternoon light slowly fading to dusk in the sky from which the plane fell. In the warm early evening of October 20, 1977, a chartered twin-engine prop plane carrying members and crew of the popular musical group Lynyrd Skynyrd crashed in the forest near this marker. Several passengers were killed, including the charismatic front man and founder, Ronnie Van Zant.

Eyewitnesses on the ground had sighted a plane flying low, much too low, over the treetops. By the time the plane hit the trees word was already spreading in this corner of Amite County, Mississippi. Within moments after the crash, as evening descended, farmers, hunters, and other volunteers converged on this area, carrying blankets, flashlights, and other tools for what they reckoned would be a grim, urgent undertaking.

The tragedy occurred because the plane had run out of fuel, so there was no fire or smoke to signal to the rescuers the crash's exact location in the wooded obscurity. However, a helicopter had been dispatched to the emergency, and it was from this chopper hovering above the trees that the volunteers were able to track to the downed plane. In the darkness the main light available to the first responders was the giant spotlight beaming eerily down from this helicopter that floated above the wreckage for a long time while rescuers worked below.

The absence of fire, plus the speedy actions of the volunteers on the ground and the medical staff who assisted them at local hospitals, were factors behind most of those aboard the plane surviving. But among the dead were lead singer Ronnie Van Zant, guitarist Steve Gaines, back-up singer Cassie Gaines (sister of Steve Gaines), assistant tour manager Dean Kilpatrick, pilot Walter McCreary, and co-pilot William Gray. Twenty of the twenty-six passengers survived, most with serious injuries.

On October 20, 1977, the band were in the early stage of an ambitious tour to promote "Street Survivors". Flying from Greenville, South Carolina, where they had played a show the night before, to Baton Rouge, Louisiana, to a scheduled concert that would never be, the members of Lynyrd Skynyrd had every reason to feel elated. They now performed for larger audiences throughout the United States and beyond. The checks were bigger. Assistants attended to them like royalty. They were in their twenties. They must have seemed invincible.

While the group were in top form, their chartered air transportation was tragically not. The day before the doomed flight suspicions about the plane, a Convair CV-240, were apparent. The company that owned the ailing aircraft had scheduled it for maintenance soon, and some band members had considered taking a commercial flight to their next performance. But alternate flight arrangements were never made, and repairs would never come.

On its final flight, above the thick green canopy of trees that cover this part of the state, the aircraft began to run out of fuel. Thinking they would never make the airport at Baton Rouge, the pilots aimed the sputtering machine toward a closer airfield in McComb, Mississippi, but even that emergency objective was too far. When the aircraft stalled and glided lifelessly down into the trees, one witness reported the sound it made was like the boom-boom-booming of railroad cars colliding during hook up. Near the tree-thick site of the crash stretched  an open pasture where the desperate pilots had hoped in vain to make an emergency landing.

At the accident many of the rescuers in the heated rush of the moment did not recognize the victims among the wreckage were members of the band Lynyrd Skynyrd. One of the rescuers recalls wondering, "What's a bunch of hippies doing on an airplane? They don't look like they can afford a ticket." Even some who recognized the band may have been confused in their excitement. One of the witnesses at the scene informed others nearby, "That's Lynyrd Skynyrd's plane, but don't worry, I think 'Leonard' made it out okay.

The best of Lynyrd Skynyrd's songs never faded in the years since the crash. The music speaks to life in the American South but touches on the universal themes of nonconformity, freedom, love, loyalty, betrayal, and loss -- transcending geography to reach fans across time and location.

In 1987, on the 10th anniversary of the crash, the band members who survived the accident- Gary Rossington, Allen Collins, Billy Powell, Leon Wilkeson, and Artimus Pyle — reunited for a tribute tour. Also on the tour were guitarists Randall Hall and earlier member Ed King. Collins, unable to perform on stage due to a prior car accident, acted as maestro to the group. No on-could completely fill the absence created by Ronnie Van Zant's untimely death, but his musical younger brother, Johnny Van Zant, would ably take on the duties of lead singer for the reformed band.

In addition to the timeless music they made during the bands classic era from 1973 to 1977, the group has recorded more studio albums and many live compilations with a changing roster of musicians since the accident Lynyrd Skynyrd was inducted into the Rock and Roll of Fame in 2006. As of this marker's dedication the band has sold over 28 million records in the United States alone. That number will surely continue to rise.