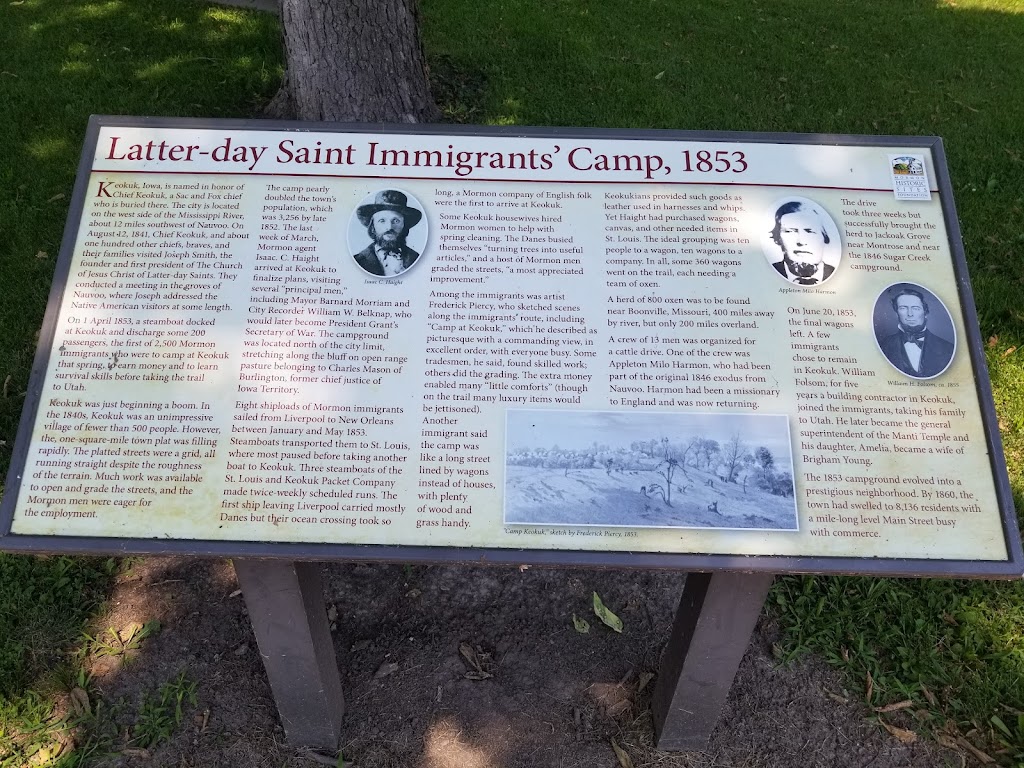 Keokuk, Iowa, is named in honor of Chief Keokuk, a Sac and Fox chief who is buried there. The city is located on the west side of the Mississippi River, about 12 miles southwest of Nauvoo. On August 12, 1841, Chief Keokuk, and about one hundred other chiefs, braves, and their families visited Joseph Smith, the founder and first president of The Church of Jesus Christ of Latter-day Saints. They conducted a meeting in the groves of Nauvoo, where Joseph addressed the Native American visitors at some length.On 1 April 1853, a steamboat docked at Keokuk and discharge some 200 passengers, the first of 2,500 Mormon immigrants who were to camp at Keokuk that spring, to earn money and to learn survival skills before taking the trail to Utah.Keokuk was just beginning a boom. In the 1840s, Keokuk was an unimpressive village of fewer than 500 people. However, the, one-square-mile town plat was filling rapidly. The platted streets were a grid, all running straight despite the roughness of the terrain. Much work was available to open and grade the streets, and the Mormon men were eager for the employmentThe camp nearly doubled the town's population, which was 3,256 by late 1852. The last week of March, Mormon agent Isaac. C. Haight arrived at Keokuk to finalize plans, visiting several "principal men," including Mayor Barnard Morriam and City Recorder William W. Belknap, who would later become President Grant's Secretary of War. The campground was located north of the city limit, stretching along the bluff on open range pasture belonging to Charles Mason of Burlington, former chief justice of Iowa Territory.Eight shiploads of Mormon immigrants sailed from Liverpool to New Orleans between January and May 1853. Steamboats transported them to St Louis, where most paused before taking another boat to Keokuk. Three steamboats of the St. Louis and Keokuk Packet Company made twice-weekly scheduled runs. The first ship leaving Liverpool carried mostly Danes but their ocean crossing took so long, a Mormon company of English folk were the first to arrive at Keokuk.Some Keokuk housewives hired Mormon women to help with spring cleaning. The Danes busied themselves "turning trees into useful articles," and a host of Mormon men graded the streets, "a most appreciated improvement."Among the immigrants was artist Frederick Piercy, who sketched scenes along the immigrants' route, including "Camp at Keokuk," which he described as picturesque with a commanding view, in excellent order, with everyone busy. Some tradesmen, he said, found skilled work; others did the grading. The extra money enabled many "little comforts" (though on the trail many luxury items would be jettisoned). Another immigrant said the camp was like a long street lined by wagons instead of houses, with plenty. of wood and grass handy.Keokukians provided such goods as leather used in harnesses and whips. Yet Haight had purchased wagons, canvas, and other needed items in St. Louis. The ideal grouping was ten people to a wagon, ten wagons to a company. In all, some 360 wagons went on the trail, each needing-a team of oxen.A herd of 800 oxen was to be found near Boonville, Missouri, 400 miles away by river, but only 200 miles overland.A crew of 13 men was organized for a cattle drive. One of the crew was Appleton Milo Harmon, who had been part of the original 1846 exodus from Nauvoo. Harmon had been a mission to England and was now returning.The drive took three weeks but successfully brought the herd to Jackoak Grove near Montrose and near the 1846 Sugar Creek campground.On June 20,1853, the final wagons left. A few immigrants chose to remain in Keokuk. William Folsom, for five years a building contractor in Keokuk, joined the immigrants, taking his family to Utah. He later became the general superintendent of the Manti Temple and his daughter, Amelia, became a wife of Brigham Young.The 1853 campground evolved into a prestigious neighborhood. By 1860, the town had swelled to 8,136 residents with a mile-long level Main Street busy with commerce.