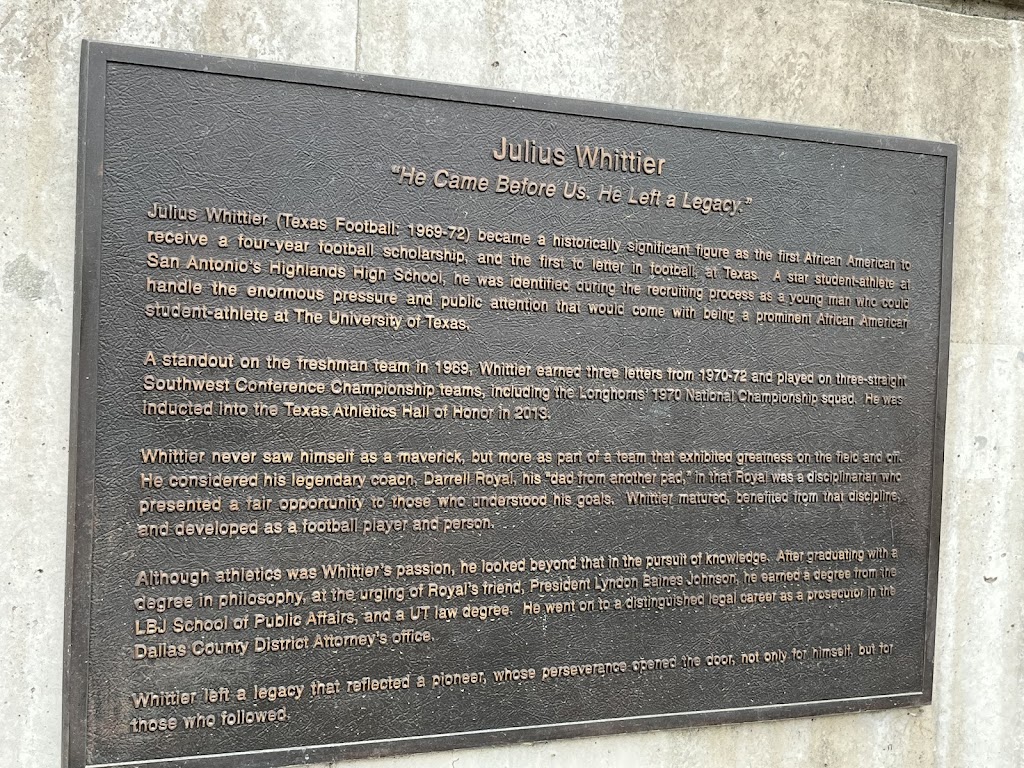 "He Came Betore Us. He Left a Legacy"
Julius Whittier (Texas Football: 1969-72) became a historically significant figure as the first African American to
receive a four-year tooiball scholarship, and the first to letter in toorball al Texas. A star student-athlete at
San Antonio's Highlands High School, he was identified during the recruiting process as a young man he could
handle the enormous pressure and public attention that would come with beine a prominent African American
student-athlete at The University of Texas.
A standout on the treshman team in 1969, Whittier cared three letters trom 1970-72 and played on three-straight
Southwest Conference Championship teams, including the Longhorns 1970 National Championship squad. He was
inducted into the Texas Ainletics Hall of Honor in 2013.
Whittier never saw himsell as a maverick, but more as pan ot a team that exhibited greatness on the field and off.
He considered his legendary coach, Darrell Royal, his “dad from another pad," in that Royal was a disciplinarian who
presented a fair opportunity to those who understood his goals, Whinier marmed, benetted tom that discipline,
and developed as a football plaver and person.
Although athletics was Whither's passion, he looked beyond that in the pursuit of knowledge. Alter graduating with a
degree in philosophy, at the urging of Royal's triend, President Lyndon Baines Johnson, he earned a degree from the
LBJ School of Public Affairs, and a UT law degree, He went on to a distinguished legal career as a prosecutor in the
Dallas County District Attorney’s office.
Whinier left a legacy that reflected a pioneer, whose perseverance opened the door, not only for himself, but for
those who followed.