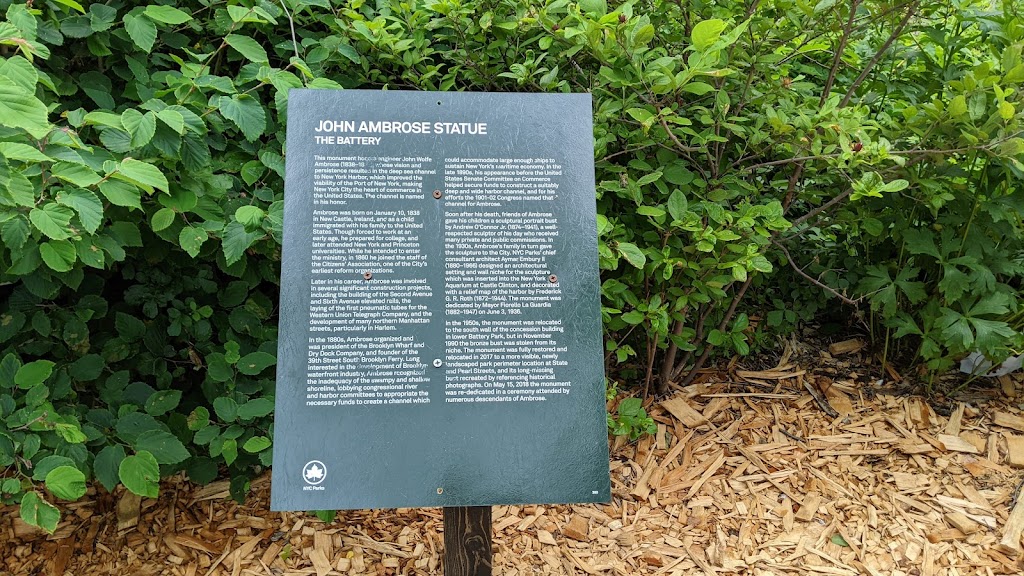 JOHN AMBROSE STATUE
THE BATTERY
This monument honors engineer John Wolfe Ambrose (1838-1899) whose vision and persistence resulted in the deep sea channel to New York Harbor, which improved the viability of the Port of New York, making New York City the heart of commerce in he United States. The channel is named in his honor.
Ambrose was born on January 10, 1838 in New Castle, Ireland, and as a child immigrated with his family to the United States. Though forced to work at an early age, he prepared for college, and later attended New York and Princeton universities. While he intended to enter the ministry, in 1860 he joined the staff of the Citizens' Association, one of the City's earliest reform organizations.
Later in his career, Ambrose was involve in several significant construction projects, including the building of the Second Avenue and Sixth Avenue elevated rails, the laying of the first pneumatic tubes for the Western Union Telegraph Company, and the development of many northern Manhattan streets, particularly in Harlem.
In the 1880s, Ambrose organized and was president of the Brooklyn Wharf and Dry Dock Company, and founder of the 39th Street South Brooklyn Ferry. Long interested in the development of Brooklyn waterfront industry, Ambrose recognized the inadequacy of the swampy and shallow shoreline, lobbying congressional river and harbor committees to appropriate the necessary funds to create a channel which could accommodate large enough ships to sustain New York's maritime economy. In the late 1890s, his appearance before the United States Senate Committee on Commerce helped secure funds to construct a suitably deep and wide harbor channel, and for his efforts the 1901-02 Congress named that channel for Ambrose.
Soon after his death, friends of Ambrose gave his children a sculptural portrait bust by Andrew O'Connor Jr. (1874-1941), a well- respected sculptor of his day who received many private and public commissions. In the 1930s, Ambrose's family in turn gave the sculpture to the City. NYC Parks' chief consultant architect Aymar Embury II (1880-1966) designed an architectural setting and wall niche for the sculpture which was inserted into the New York Aquarium at Castle Clinton, and decorated jef map of the harbor by Frederick with a relief G. R. Roth (1872-1944). The monument was dedicated by Mayor Fiorello La Guardia (1882-1947) on June 3, 1936.
In the 1950s, the monument was relocated to the south wall of the concession building in lower Battery Park, but in November 1990 the bronze bust was stolen from its niche. The monument was fully restored and relocated in 2017 to a more visible, newly and Pearl Streets, and its long-missing bust recreated by referencing historical photographs. On May 15, 2018 the monument was re-dedicated in a ceremony attended by numerous descendants of Ambrose.