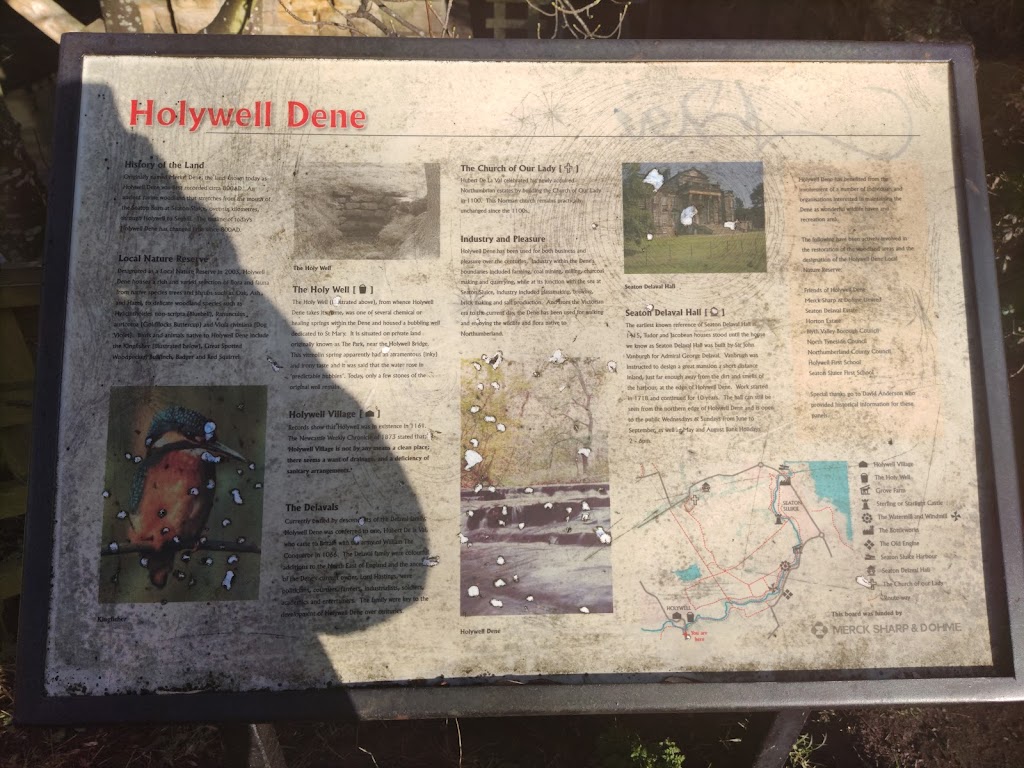 History of the Land

Originally named Merkel Dene, the land known today as Holy­well Dene was first recorded circa 800 AD. An ancient ravine woodland that stretches from the mouth of the Seaton Burn at Season Sluice, over six kilometres, through Holy­well to Seghill. The outline of today’s Holy­well Dene has changed little since 800 AD.

Designated as a Local Nature Reserve in 2003, Holy­well Dene houses a rich and varied selection of flora and fauna from native species trees and shrubs such as Oak, Ash, and Hazel, to delicate woodland species such as Hya­cinth­oid­es non-scripta (Blue­bell), Ra­nun­cu­lus auri­coma (Goldi­locks Butter­cup) and Viola ri­vi­nia­na (Dog Violet). Birds and animals native to Holy­well Dene include the King­fisher (Illustrated below), Great Spotted Wood­pecker, Bull­finch, Badger, and Red Squirrel.

The Holy Well (illustrated above), from whence Holy­well Dene takes its name, was one of several chemical or healing springs within the Dene and housed a bubbling well dedicated to St Mary. It is situated on private land originally known as The Park, near the Holy­well Bridge. This vitreolin spring apparently had an atra­ment­ous (inky) and irony taste and it was said that the water rose in ‘predictable bubbles’. Today, only a few stones of the original well remain.

Records show that Holy­well was in existence in 1161. The Newcastle Weekly Chronicle of 1873 stated that: ‘Holy­well Village is not by any means a clean place; there seems a want of drainage, and a deficiency of sanitary arrangements.’

Currently owned by descendants of the Delaval family, Holy­well Dene was conferred to one, Hubert de la Val, who came to britain with the army of William the Conqueror in 1066. The Delaval family were colourful additions to the North East of England and the ancestors of the Dene’s current owner, Lord Hastings, were politicians, courtiers, farmers, industrialists, soldiers, academics and entertainers. The family were key to the development of Holy­well Dene over centuries.

The Church of Our Lady

Hubert de la Val celebrated his newly acquired Northumbrian estates by building the Church of our Lady in 1100. This Norman church remains practically unchanged since the 1100s.

Holy­well Dene has been used for both business and pleasure over the centuries. Industry within the Dene’s boundaries included farming, coal mining, milling, charcoal making and quarrying, while at its junction with the sea at Seaton Sluice, industry included glassmaking, brewing, brick making and salt production. And from the Victorian era to the current day, the Dene has been used for walking and enjoying the wildlife and flora native to Northumberland.

The earliest known reference of Seaton Delaval Hall is 1415; Tudor and Jacobean houses stood until the house was built by Sir John Vanbrugh for Admiral George Delaval. Vanbrugh was instructed to design a great mansion a short distance inland, just far enough away from the dirt and smells of the harbour, at the edge of Holy­well Dene. Work started in 1718 and continued for 10 years. The hall can still be seen from the northern edge of Holy­well Dene and is open to the public Wednesdays & Sundays from June to September, as well as May and August Bank Holidays 2–6pm.

[Special thanks and map]

Holy­well Dene has benefited from the involvement of a number of individuals and organisations interested in maintaining the Dene as wonderful wildlife haven and recreation area.

The following have been actively involved in the restoration of the woodland areas and the designation of the Holy­well Dene Local Nature Reserve:

Special thanks go to David Anderson who provided historical information for these panels.

This board was funded by Merck Sharp & Dohme.