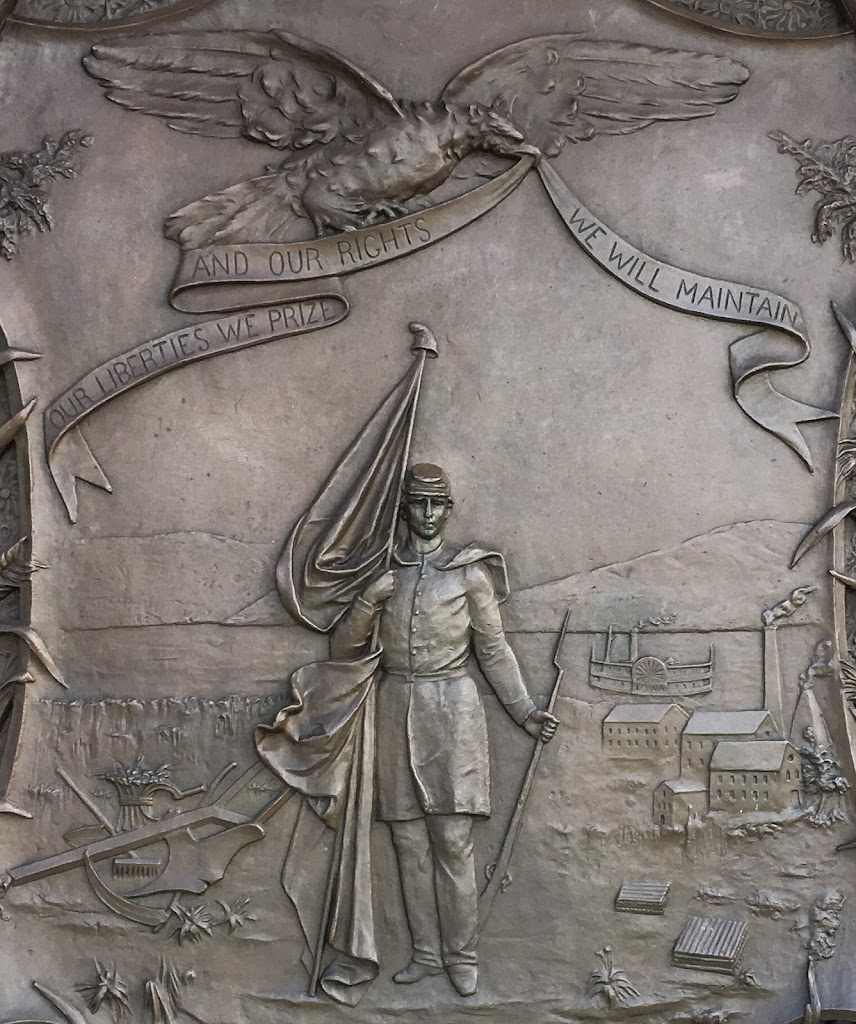 In 1847, the Iowa Legislature passed a law creating a state seal. More on the wording of the law, which has caused a stir in the state Capitol in recent times, in a moment.

The straightforward part of the seal is the motto: "Our liberties we prize and our rights we will maintain." I like that: Straightforward. A little militant. No Latin.

However, the Legislature offered only a description of what the seal should look like. Here it is (and as you read it, see if there's a phrase that kind of sticks out as a little awkward):

"The secretary of state ... is ... hereby authorized to procure a seal which shall be the great seal of the state of Iowa, two inches in diameter, upon which shall be engraved the following device, surrounded by the words, 'The Great Seal of the State of Iowa' - a sheaf and field of standing wheat, with a sickle and other farming utensils, on the left side near the bottom; a lead furnace and pile of pig lead on the right side; the citizen soldier, with a plow in his rear, supporting the American flag and liberty cap with his right hand, and his gun with his left, in the center and near the bottom; the Mississippi River in the rear of the whole, with the steamer Iowa under way; an eagle near the upper edge, holding in his beak a scroll, with the following inscription upon it: 'Our liberties we prize, and our rights we will maintain.'"

(Yes -- the Legislature wrote "with a plow in his rear." That phrase prompted an Iowa state legislator in 2010 to offer a bill to amend the wording. Lawmakers did not act on the suggestion.)

That 1847 description left a lot to artists' imaginations and produced a series of rather passive and homely images. Search for "Great Seal of Iowa" in Google images if you're curious about what I mean.

I didn't know any of that history when I visited the state capitol grounds in Des Moines last fall (2016). What struck me about the tablet or relief -- OK, technically not a plaque -- was what I take to be its direct reference to the Civil War. The soldier depicted is dressed as a Union infantryman. The musket he holds on his left side has bayonet fixed. The Stars and Stripes he supports with his right arm is partially draped around him. He is taking a step toward the viewer. His look is resolute and unafraid.

"Our liberties we prize and our rights we will maintain"? This guy means it. Is there a Civil War message here -- a reference, perhaps, to how seriously the state took its duty to preserve the Union?

About 75,000 Iowans -- more than one in five adult men -- served during the war. Some 13,000 of those died and another 8,500 were wounded and survived. Iowa's experience largely reflected the experience of every state, North and South. In a way that's hard to imagine today, when so few serve in our armed forces, the war touched everyone.

An entry on an Iowa state government site that describes the monuments on the capitol grounds notes that the Iowa seal tablet  was commissioned in the mid-1880s and completed in the early 1890s. The war was still an enduring, dominant memory for a whole generation of Americans then, just as World War II was in the 1960s -- when war stories were common prime-time TV fare and a frequent Hollywood subject.

The Iowa state site also mentions the name of the sculptor, Alexander Doyle, who had a national reputation by the time he got the commission for the tablet and a nearby drinking fountain featuring the cast bronze head of a bison.

Doyle's reputation rested in part on his Civil War sculptures. But he was not a Yankee nationalist. His commissions came from both the North and from the defeated Confederacy -- and he was especially active in New Orleans, where he created a series of statues commemorating Southern heroes.

I think if there's a message in the Iowa Great Seal tablet, it's that Doyle was an artist who understood the time he was depicting and the emotional expectations of his audience and knew how to translate that understanding into bronze. His was not a common talent.