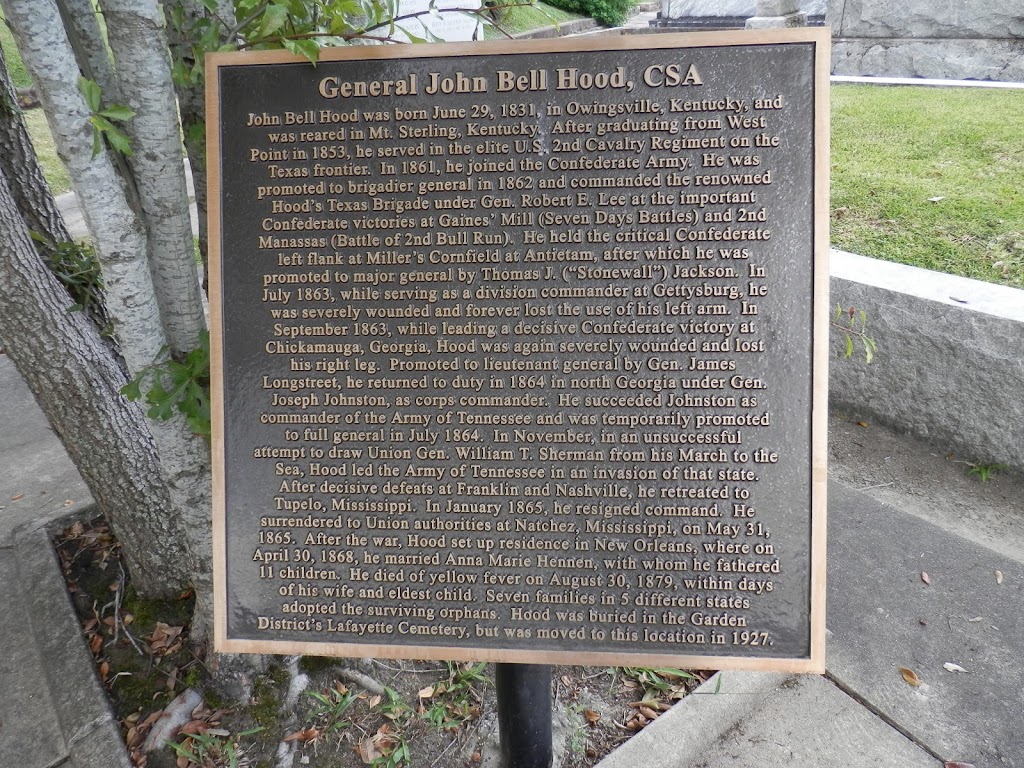 John Bell Hood was born June 29, 1831, in Owingsville, Kentucky, and was reared in Mt. Sterling, Kentucky. After graduating from West Point in 1853, he served in the elite U.S. 2nd Cavalry Regiment on the Texas frontier. In 1861, he joined the Confederate Army. He was promoted to brigadier general in 1862 and commanded the renowned Hood's Texas Brigade under Gen. Robert E. Lee at the important Confederate victories at Gaines' Mill (Seven Days Battles) and 2nd Manassas (Battle of 2nd Bull Run). He held the critical Confederate left flank at Miller's Cornfield at Antietam, after which he was promoted to major general by Thomas J. ("Stonewall") Jackson. In July 1863, while serving as a division commander at Gettysburg, he was severely wounded and forever lost the use of his left arm. In September 1863, while leading a decisive Confederate victory at Chickamauga, Georgia, Hood was again severely wounded and lost his right leg. Promoted to lieutenant general by Gen. James Longstreet, he returned to duty in 1864 in north Georgia under Gen. Joseph Johnston, as corps commander. He succeeded Johnston as commander of the Army of Tennessee and was temporarily promoted to full general in July 1864. In November, in an unsuccessful attempt to draw Union Gen. William T. Sherman from his March to the Sea, Hood led the Army of Tennessee in an invasion of that state. After decisive defeats at Franklin and Nashville, he retreated to Tupelo, Mississippi. In January 1865, he resigned command. He surrendered to Union authorities at Natchez, Mississippi, on May 31, 1865. After the war, Hood set up residence in New Orleans, where on April 30, 1868, he married Anna Marie Hennen, with whom he fathered 11 children. He died of yellow fever on August 30, 1879, within days of his wife and eldest child. Seven families in 5 different states adopted the surviving orphans. Hood was buried in the Garden District's Lafayette Cemetery, but was moved to this location in 1927.