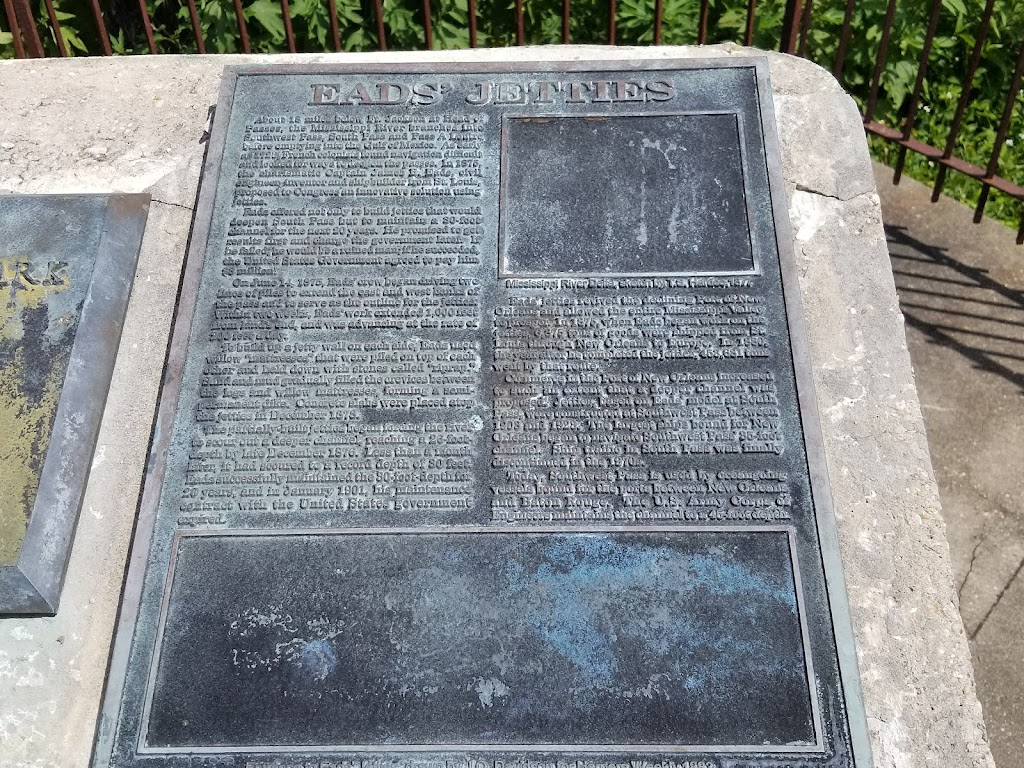 About 18 miles below Ft. Jackson at Head of Passes, the Mississippi River branches into Southwest Pass, South Pass and Pass A Lutre before emptying into the Gulf of Mexico. As early as 1723 French colonists found navigation difficult and looked for ways to deepen the passes. In 1875, the charismatic Captain James B. Eads, civil engineer, inventor and shipbuilder from St. Louis, proposed to Congress an innovative solution using jetties.Eads offered not only to build jetties that would deepen South Pass but to maintain a 30-foot channel for the next 20 years. He promised to get results first and charge the government later. If he failed he would be a ruined man; if he succeeded the United States Government agereed to pay him $8 million!On June 14, 1875, Eads' crew began driving two lines of files to extend the east and west banks of the pass and to serve as the outline for the jetties. Within two weeks, Fads work extended 1,000 feet from land's end, and was advancing at the rate of 200 feet a dayTo build on a jetty wall on each side, Eads used willow "mattresses" that were piled on top of each other and held down with stones called "riprap." Sand and mud gradually filled the crevices between the logs and willow mattresses, forming a semi- permanent dike. Concrete slabs were placed atop the jetties in December 1878.The partially built jetties began forcing the river to scour out a deeper channel reaching a 26-foot- depth by late December 1876. Less than a month Later, it had scoured to a record depth of 30 feet Eads successfully maintained the 80-foot-depth for 20 years, and in January 1901, his maintenance contract with the United States government expired.Eads jetties revived the declining Port of New Orleans and allowed the entire Mississippi Valley to prosper. In 1875, when Eads began work on the jetties, 6,875 tons of goods were shipped from St. Louis through New Orleans to Europe. In 1880 the year after he completed the jetties, 453,681 tons went by that route.Commerce in the Port of New Orleans increased to such an extent that a deeper channel was proposed. Jetties, based on Eads model at South Pass, were constructed at Southwest Pass between 1908 and 1928. The largest ships bound for New Orleans began to navigate Southwest Pass 35-foot channel. Ship traffic in South Pass was finally discontinued in the 1970s.Today Southwest Pass is used by oceangoing vessels bound for the ports between New Orleans and Baton Rouge, The US Army Corps of Engineers maintains the channel to a 45-foot depth.