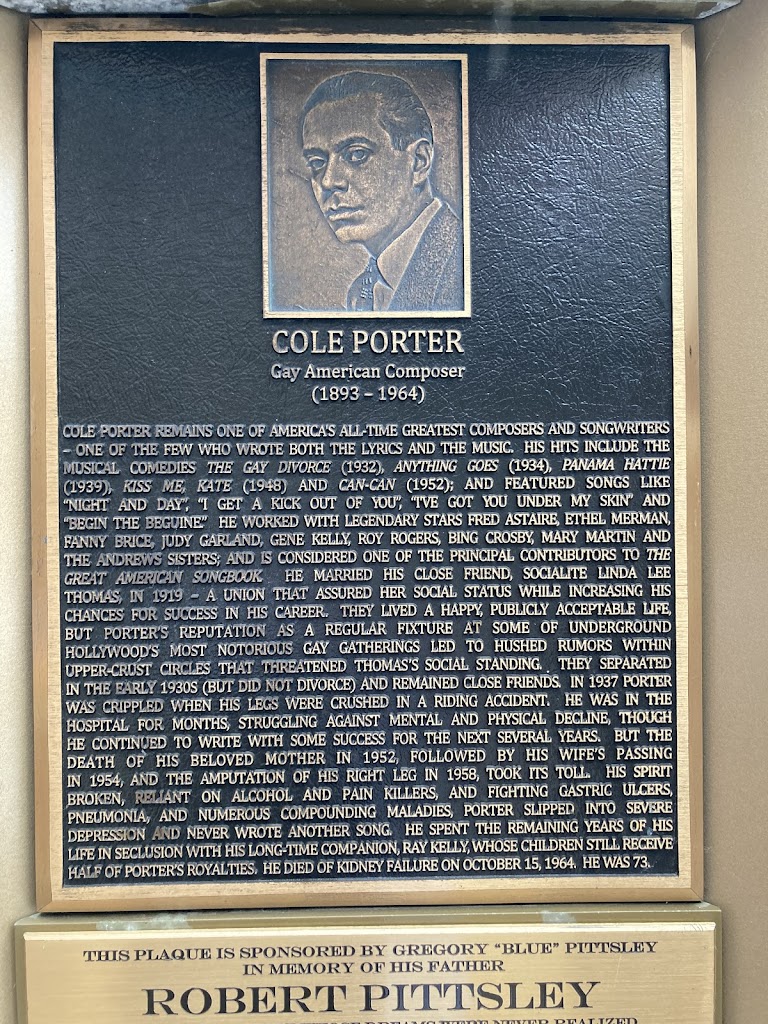 Cole Porter
Gay American composer
(1893-1964)
Cole Porter remains one of America’s all-time greatest composers and songwriters – one of the few who wrote both the lyrics and the music. His hits include the musical comedies The Gay Divorcee (1932), Anything Goes (1934), Panama Hattie (1939), Kiss Me, Kate (1948) and Can-Can (1952); and featured songs like “night and day, “ “I get a kick out of you, “ “I’ve got you under my skin “and “Begin the Beguine“ He worked with legendary stars Fred Astaire, Ethel Merman, Fanny Brice, Judy Garland, Gene Kelly, Roy Rogers, Bing Crosby, Mary Martin and the Andrew Sisters; and is considered one of the principal contributors to the great American song book. He married his close friend, socialite Linda Lee Thomas , in 1919 - a union that assured her social status while increasing his chances for success in his career. They lived a happy, publicly acceptable life, but Porter‘s reputation as a regular fixture at some of underground Hollywood’s most notorious gay gatherings led to hushed rumors within upper-crust circles that threatened Thomas’s social standing. They separated in the early 1930s (but did not divorce) and remained close friends. In 1937 Porter was crippled when his legs were crushed in a riding accident. He was in the hospital for months struggling against mental and physical decline, though he continued to write with some success for the next several years. But the death of his beloved mother in 1952, followed by his wife’s passing in 1954, and the amputation of his right leg in 1958, took its toll. His spirit broken, reliant on alcohol and painkillers, and fighting gastric ulcers, pneumonia, and numerous compounding maladies, Porter slipped into severe depression and never wrote another song. He spent the remaining years of his life in seclusion with his longtime companion, Ray Kelly, whose children still receive half of Porter’s royalties. He died of kidney failure on October 15, 1964. He was 73.
Submitted by
Bryan Arnold
@nanowhiskers