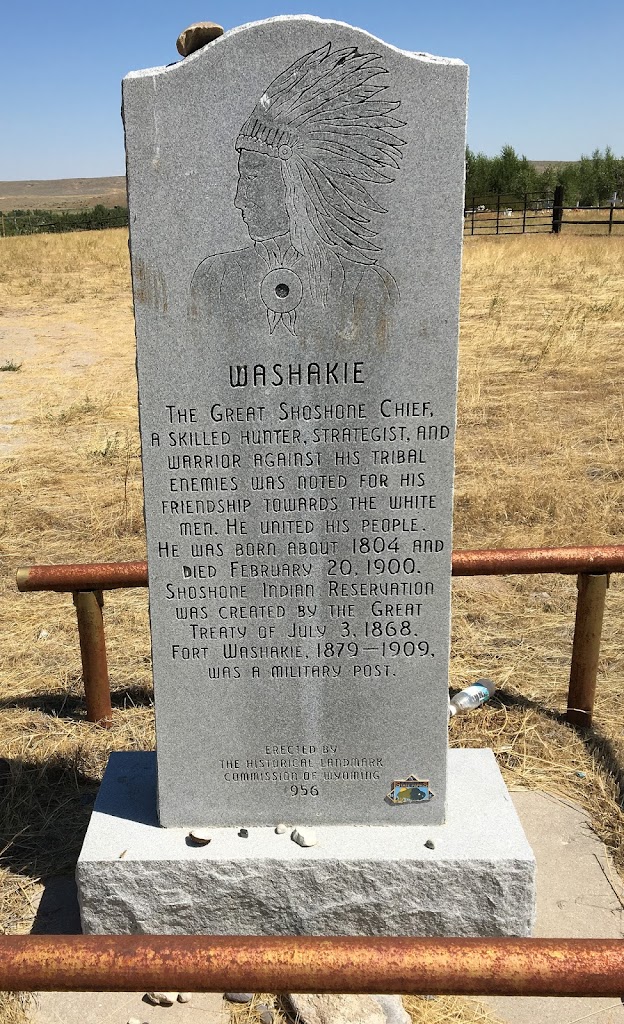 Tooling across Wyoming before the August 2017 eclipse, we drove into a town called Fort Washakie (population 1,759; elevation 5,570 feet) on U.S. 287 (a.k.a. the Chief Washakie Trail). We had no intention of stopping, but on the way out of town we passed a sign advertising Sacajawea's gravesite. We U-turned and headed west through town. A half-mile later, we saw a cemetery and pulled in. There was a granite marker for a notable Native American: Chief Washakie. Here's the text:

The great Shoshone chief, a skilled hunter, strategist, and warrior against his tribal enemies, was noted for his friendship towards the white men. He united his people. He was born about 1804 and died February 20, 1900. Shoshone Indian Reservation was created by the Great Treaty of July 3, 1868. Fort Washakie, 1879-1909, was a military post.

Erected by the Historical Landmark Commission of Wyoming, 1956.

This is a historical marker and doesn't say explicitly that Washakie is buried at this site -- but there are no references I find that say he's buried elsewhere (and speaking of references, here's an excellent essay on Washakie's life and times).

Next question: Where was Sacajawea's grave? Short answer: Not here. The person who may have been Sacajawea is interred at a second cemetery, about a mile and a half from the first. We didn't find it -- I was thinking of the long drive ahead, to southwestern Nebraska, and I didn't see any signs along the side-roads we were on.  So we moved on. In any case, there's an interesting debate about whether the woman buried there in 1884 was actually Sacajawea (see "Who's Buried in Sacajawea's Grave?").