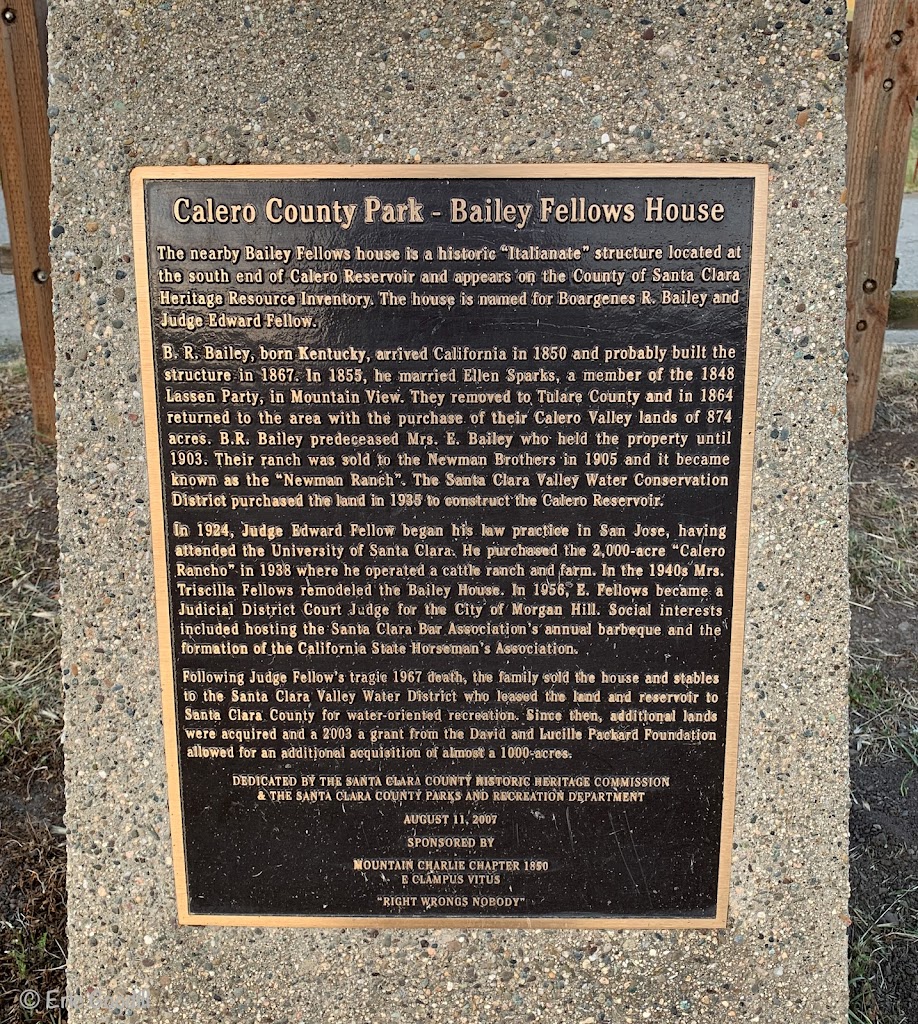 Calero County Park – Bailey Fellows House
The nearby Bailey Fellows house is a historic "Italianate" structure located at the south end of Calero Reservoir and appears on the County of Santa Clara Reritage Resource Inventory. The house is named for Boargenes R. Bailey and Judge Edward Fellow.
B. R. Bailey, born Kentucky, arrived California in 1850 and probably built the structure in 1867. In 1855, he married Ellen Sparks, a member of the 1848 Lassen Party, in Mountain View. They removed to Tulare County and in 1864 returned to the area with the purchase of their Calero Valley land of 874 acres. B. R. Bailey predeceased Mrs. E. Bailey who held the property until 1903. Their ranch was sold to the Newman Brothers in 1905 and it became known as the "Newman Ranch." The Santa Clara Valley Water Conservation District purchased the land in 1935 to construct the Calero Reservoir.
In 1924, Judge Edward Fellow [sic] began his law practice in San Jose, having attended the University of Santa Clara. He purchased the 2,000-acre "Calero Rancho" in 1938 where he operated a cattle ranch and farm. In the 1940s Mrs. Triscilla Fellows remodeled the Bailey Bouse. In 1956, E. Fellows became a Judicial District Court Judge for the City of Morgan Hill. Social interests included hosting the Santa Clara Bar Association's annual barbecue in the formation of the California State Horseman's Association.
Following Judge Fellow's [sic] tragic 1967 death, the family sold the house and stables to the Santa Clara Valley water District who leased the land and reservoir to Santa Clara County for a water-oriented recreation. Since then, additional lands were acquired and a 2003 a [sic] grant from a David and Lucile Packard Foundation allowed for an additional acquisition of about 1000 acres.
Dedicated by the Santa Clara County Historic Heritage Commission & the Santa Clara County Parks and Recreation Department
August 11, 2007
Sponsored by
Mountain Charlie Chapter 1850
E clampus Vitus
"Right Wrongs Nobody"