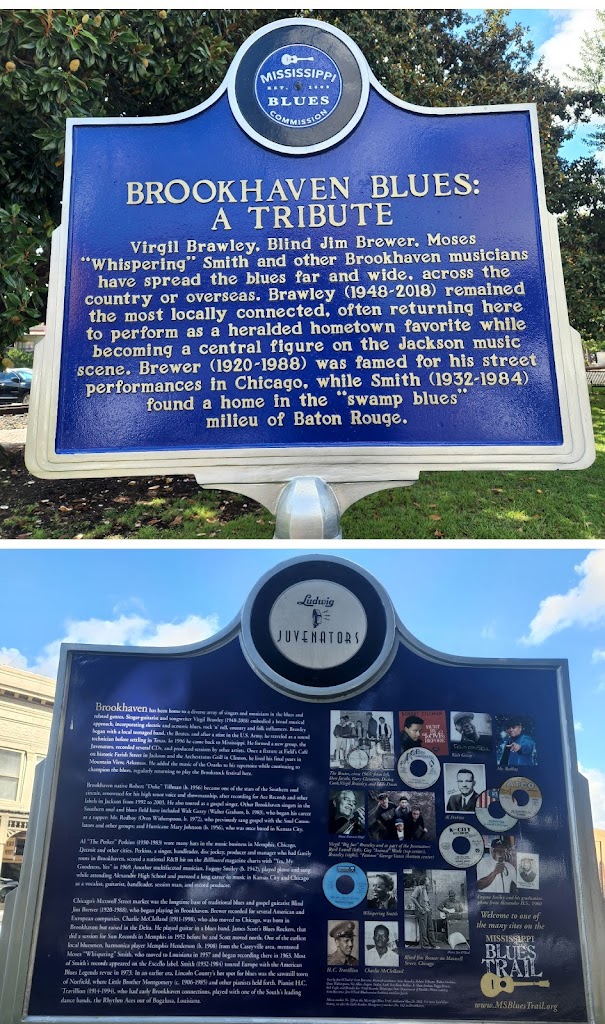 FrontVirgil Brawley, Blind Jim Brewer, Moses “Whispering” Smith and other Brookhaven musicians have spread the blues far and wide, across the country or overseas. Brawley (1948-2018) remained the most locally connected, often returning here to perform as a heralded hometown favorite while becoming a central figure on the Jackson music scene. Brewer (1920-1988) was famed for his street performances in Chicago, while Smith (1932-1984) found a home in the “swamp blues” milieu of Baton Rouge.RearBrookhaven has been home to a diverse array of singers and musicians in the blues and related genres. Singer-guitarist and songwriter Virgil Brawley (1948-2018) embodied a broad musical approach, incorporating electric and acoustic blues, rock ‘n’ roll, country and folk influences. Brawley began with a local teenaged band, the Brutes, and after a stint in the U.S. Army, he traveled as a sound technician before settling in Texas. In 1996 he came back to Mississippi. He formed a new group, the Juvenators, recorded several CDs, and produced sessions by other artists. Once a fixture at Field’s Café on historic Farish Street in Jackson and the Archestratus Grill in Clinton, he lived his final years in Mountain View, Arkansas. He added the music of the Ozarks to his repertoire while continuing to champion the blues, regularly returning to play the Brookstock festival here.Brookhaven native Robert “Duke” Tillman (b. 1956) became one of the stars of the Southern soul circuit, renowned for his high tenor voice and showmanship, after recording for Ace Records and other labels in Jackson from 1992 to 2003. He also toured as a gospel singer. Other Brookhaven singers in the Southern soul and blues field have included Walt Gezzy (Walter Graham, b. 1983), who began his career as a rapper; Mr. Redboy (Oren Witherspoon, b. 1972), who previously sang gospel with the Soul Consolators and other groups; and Hurricane Mary Johnson (b. 1956), who was once based in Kansas City.Al “The Perker” Perkins (1930-1983) wore many hats in the music business in Memphis, Chicago, Detroit and other cities. Perkins, a singer, bandleader, disc jockey, producer and manager who had family roots in Brookhaven, scored a national R&B hit on the Billboard magazine charts with “Yes, My Goodness, Yes” in 1969. Another multifaceted musician, Eugene Smiley (b. 1942), played piano and sang while attending Alexander High School and pursued a long career in music in Kansas City and Chicago as a vocalist, guitarist, bandleader, session man, and record producer.Chicago’s Maxwell Street market was the longtime base of traditional blues and gospel guitarist Blind Jim Brewer (1920-1988), who began playing in Brookhaven. Brewer recorded for several American and European companies. Charlie McClelland (1911-1998), who also moved to Chicago, was born in Brookhaven but raised in the Delta. He played guitar in a blues band, James Scott’s Blues Rockers, that did a session for Sun Records in Memphis in 1952 before he and Scott moved north. One of the earliest local bluesmen, harmonica player Memphis Henderson (b. 1908) from the Caseyville area, mentored Moses “Whispering” Smith, who moved to Louisiana in 1957 and began recording there in 1963. Most of Smith’s records appeared on the Excello label. Smith (1932-1984) toured Europe with the American Blues Legends revue in 1973. In an earlier era, Lincoln County’s hot spot for blues was the sawmill town of Norfield, where Little Brother Montgomery (c. 1906-1985) and other pianists held forth. Pianist H.C. Travillion (1914-1994), who had early Brookhaven connections, played with one of the South’s leading dance bands, the Rhythm Aces out of Bogalusa, Louisiana.