Birthplace of the Martini 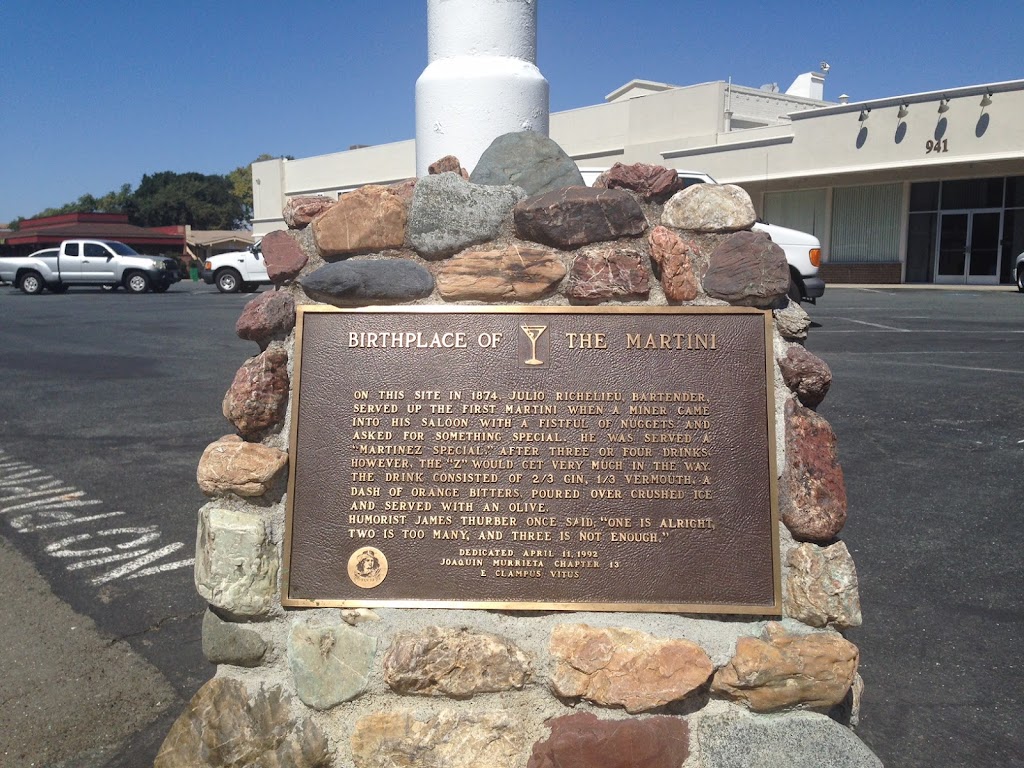 A plaque marking the supposed birthplace of the Martini cocktail, at 911 Alhambra Avenue in Martinez, California. The location of the plaque is approximate, and the story on the plaque is likely more legend than fact. A number of theories have been proposed as to the origin of the Martini - some say it was born in a hotel in either New York or San Francisco, but the Martinez story is the most often repeated. How is a hotel to compete with the story of a miner 49er itching to celebrate the finding of a large lump of gold?

BIRTHPLACE OF THE MARTINI

On this site in 1874, Julio Richelieu, Bartender, served up the first Martini when a miner came into his saloon with a fistful of nuggets and asked for something special. He was served a "Martinez Special." After three or four drinks, however, the "Z" would get very much in the way. The drink consisted of 2/3 gin, 1/3 vermouth, a dash or orange bitters, poured over crushed ice and served with an olive.

Humorist James Thurber once said, "One is alright, two is too many, and three is not enough."

The 1884 version of the Modern Bartender's Guide, the first known publication of the recipe, describes the Martinez Cocktail as "Same as a Manhattan, only you substitute gin for whisky." In 1887, Jerry Thomas' Bartender's Guide includes a recipe somewhat similar to the one on the plaque (1 dash Boker's bitters, 2 dashes of Maraschino, 1 pony of Old Tom Gin, 1 wine-glass of Vermouth, shaken with ice and served up with lemon). The Martinez - whether it is the precursor to the modern Martini or not - has enjoyed a recent revival in popularity, and most good cocktail bars (not just the ones in Martinez and nearby) will make one.