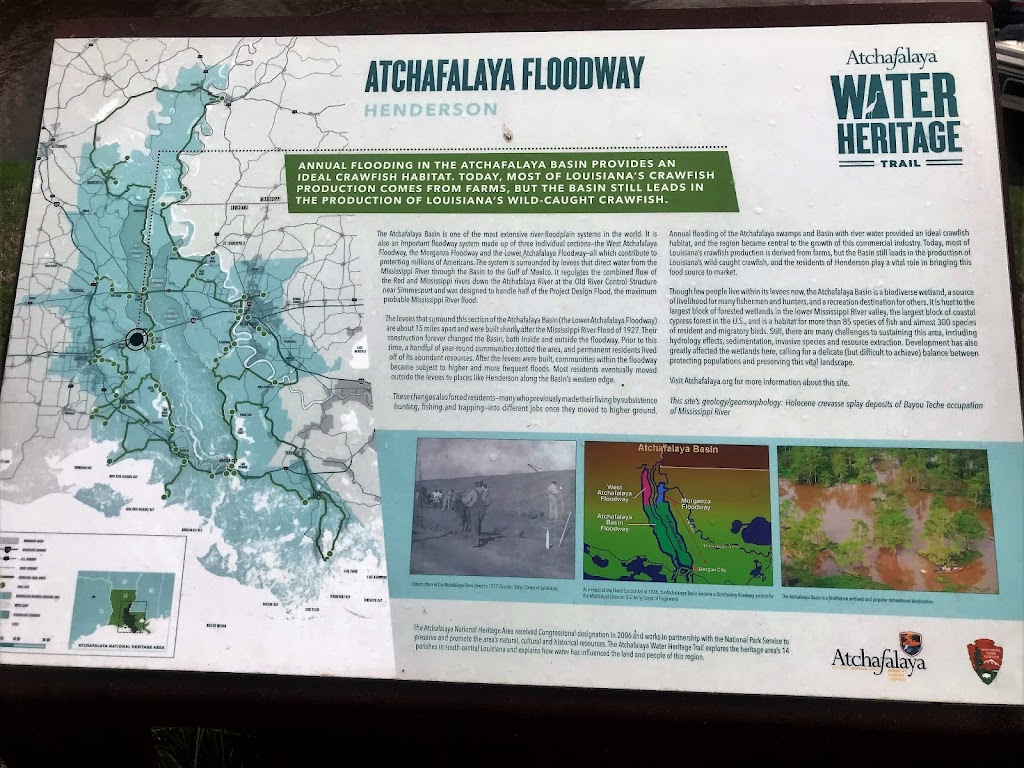 Annual flooding in the Acthafalaya Basin provides an ideal crawfish habitat. Today, most of Louisiana's crawfish production comes from farms, but the Basin still leads in the production of wild-caught crawfish.

The Atchafalaya Basin is one of the most extensive river-floodplain systems in the world. It is also an important floodway system made up of three individual sections—the West Atchafalaya Floodway, the Morganza Floodway and the Lower Atchafalaya Floodway—all which contribute to protecting millions of Americans. The system is surrounded by levees that direct water from the Mississippi River through the Basin to the Gulf of Mexico. It regulates the combined flow of the Red and Mississippi rivers down the Atchafalaya River at the Old River Control Structure near Simmesport and was designed to handle half of the Project Design Flood, the maximum probable Mississippi River flood.

The levees that surround this section of the Atchafalaya Basin (the Lower Atchafalaya Floodway) are about 15 miles apart and were built shortly after the Mississippi River Flood of 1927. Their construction forever changed the Basin, both inside and outside the floodway. Prior to this time, a handful of year-round communities dotted the area, and permanent residents lived off of its abundant resources. After the levees were built, communities within the floodway became subject to higher and more frequent floods. Most residents eventually moved outside the levees to places like Henderson along the Basin’s western edge.

These changes also forced residents—many who previously made their living by subsistence hunting, fishing and trapping—into different jobs once they moved to higher ground. Annual flooding of the Atchafalaya swamps and Basin with river water provided an ideal crawfish habitat, and the region became central to the growth of this commercial industry. Today, most of Louisiana’s crawfish production is derived from farms, but the Basin still leads in the production of Louisiana’s wild-caught crawfish, and the residents of Henderson play a vital role in bringing this food source to market.

Though few people live within its levees now, the Atchafalaya Basin is a biodiverse wetland, a source of livelihood for many fishermen and hunters, and a recreation destination for others. It is host to the largest block of forested wetlands in the lower Mississippi River valley, the largest block of coastal cypress forest in the U.S., and is a habitat for more than 85 species of fish and almost 300 species of resident and migratory birds. Still, there are many challenges to sustaining this area, including hydrology effects, sedimentation, invasive species and resource extraction. Development has also greatly affected the wetlands here, calling for a delicate (but difficult to achieve) balance between protecting populations and preserving this vital landscape.

Visit Atchafalaya.org for more information about this site.