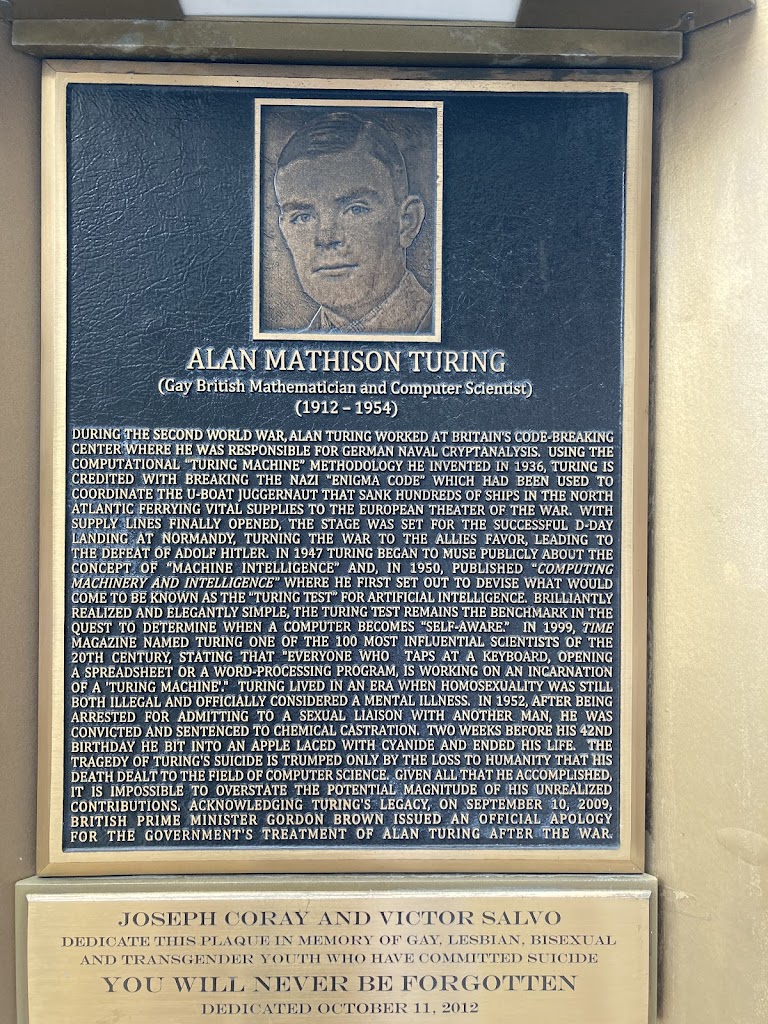 Alan Mathison Turing
(Gay British Mathematician and Computer Scientist)
(1912-1954)
During the second world war, Alan Turing worked at Britain’s code breaking center where he was responsible for German naval cryptanalysis. Using the computational “Turing machine“ methodology he invented in 1936, Turing is credited with breaking the Nazi “enigma code“ which I’ve been used to coordinate the U-boat juggernaut that saying hundreds of ships in the north Atlantic faring vital supplies to the European theater of war. With supply lines finally open, the stage was set for the successful D-Day landing at Normandy, turning the war to the allies favor, leading to the defeat of Adolf Hitler. In 1947 touring began to muse publicly about the concept of “machine intelligence“ and, in 1950, published “computing machinery and intelligence” where he first set out to devise what would come to be known as the “Turing test” for artificial intelligence. Brilliantly realized and elegantly simple, the Turing test remains the benchmark in the quest to determine when a computer becomes “self-aware.”  In 1999, Time magazine named Turing one of the 100 most influential scientists of the 20th century, stating that “everyone who tabs and keyboard, opening a spreadsheet or a word processing machine, is working on the incarnation of a “Turing machine.”  Turing lived in an era when homosexuality was still both illegal and officially considered a mental illness. In 1952, after being arrested for admitting to a sexual liaisonwith another man, he was convicted and sentenced to chemical castration. Two weeks before his 42nd birthday he bit into an apple laced with cyanide and ended his life. This tragedy of Turing’s suicide is trumped only by the loss to humanity that his death dealt to the field of computer science. Given all that he accomplished, it is impossible to overstate the potential magnitude of his unrealized contributions. Acknowledging Turing’s legacy, on September 10, 2009, British Prime Minister Gordon Brown issued an official apology for the governments treatment of Alan Turing after the war.
Submitted by
Bryan Arnold
@nanowhiskers