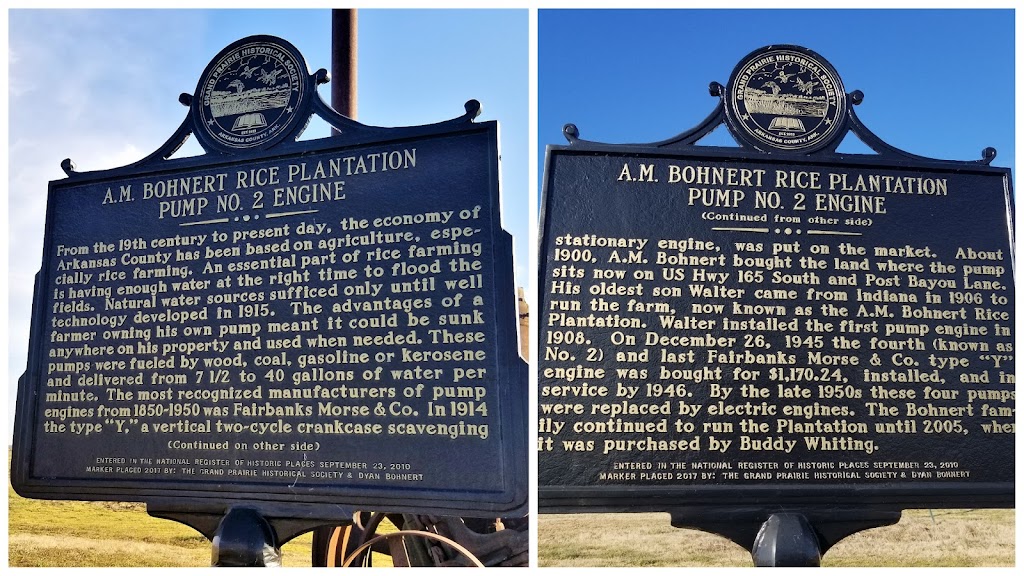 From the 19th century to present day, the economy of Arkansas County has been based on agriculture, especially rice farming. An essential part of rice farming is having enough water at the right time to flood the fields. Natural water sources sufficed only until well technology developed in 1915. The advantages of a farmer owning his own pump meant it could be sunk anywhere on his property and used when needed. These pumps were fueled by wood, coal, gasoline or kerosene and delivered from 7 1/2 to 40 gallons of water per minute. The most recognized manufacturers of pump engines from 1850-1950 was Fairbanks Morse & Co. In 1914 the type "Y,” a vertical two-cycle crankcase scavenging

(Continued on other side)

(Continued from other side)
stationary engine, was put on the market. About 1900, A.M. Bohnert bought the land where the pump sits now on US Hwy 165 South and Post Bayou Lane. His oldest son Walter came from Indiana in 1906 to run the farm, now known as the A.M. Bohnert Rice Plantation. Walter installed the first pump engine in 1908. On December 26, 1945 the fourth (known as No. 2) and last Fairbanks Morse & Co. type “Y” engine was bought for $1,170.24, installed, and in service by 1946. By the late 1950s these four pumps were replaced by electric engines. The Bohnert family continued to run the Plantation until 2005, when it was purchased by Buddy Whiting.Entered in the National Register of Historic Places September 23, 2010